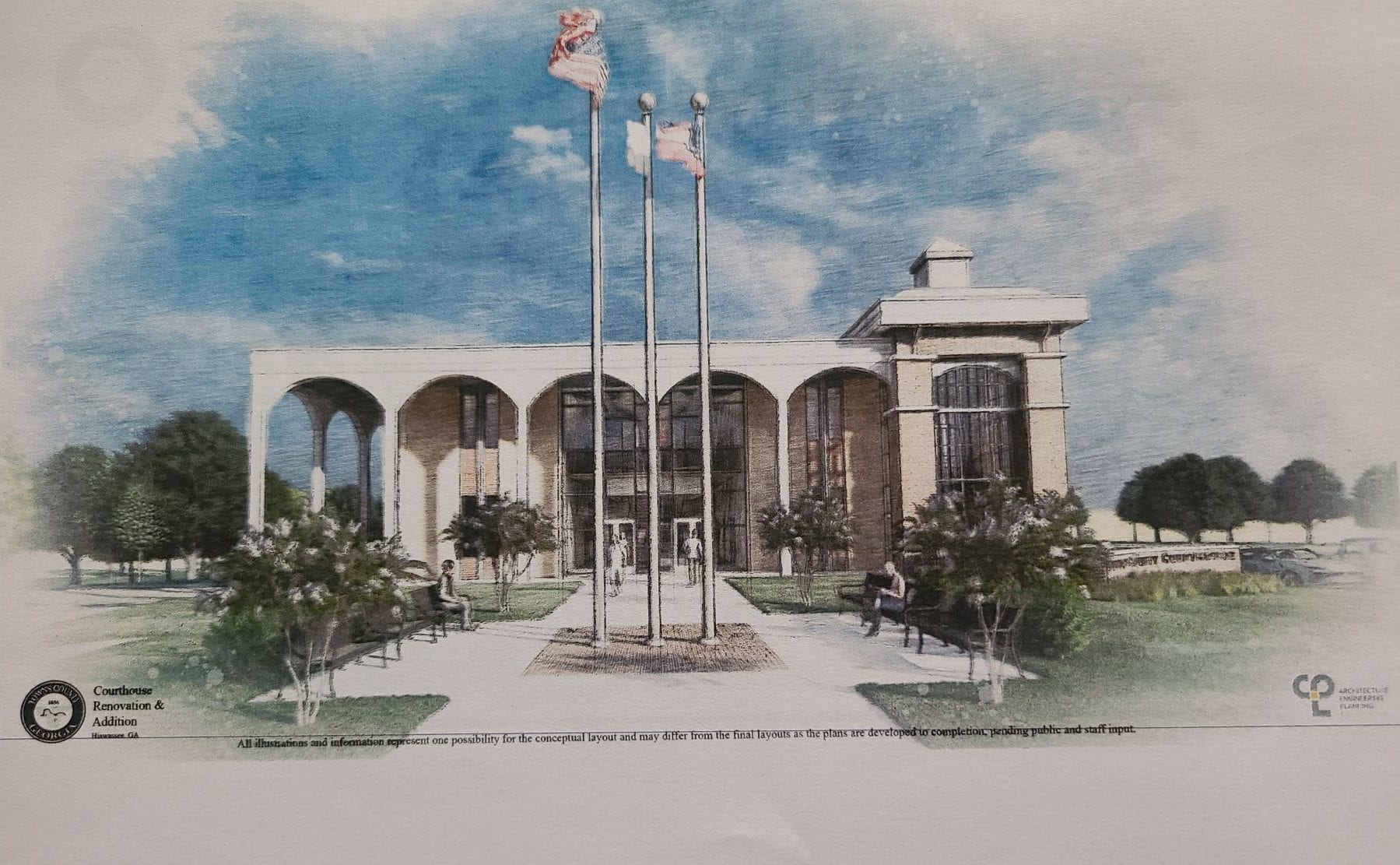 “I want to thank the Towns County Citizens for passing the SPLOST and Freeport Tax,” said Bradshaw.

Taxes didn’t increase with the passage of SPLOST; everything remains at seven percent.

“Now we can bring our courthouse up to date, not only in looks but the function of the courthouse,” Bradshaw added.

Bradshaw explained the architect’s plans during the first regularly scheduled meeting since March.

The bulk of the money will be spent on the interior of the current courthouse. They will gut the building to bring it up to code and add an offset to the back. The entire process should take around 18 months.

“The addition on the back will be courtrooms, holding cells, a judge’s office. It will be three courtrooms – two at 120 capacity and one at 60. The one at 60 will be the probate judge,” Bradshaw explained to the room.

Bradshaw and the architects went through several rounds of drawings before deciding on the final layout. Once the architects found drawings of the original courthouse, they incorporated its style into the add-on. The concept will break up the square box look and incorporate darker brick against the light brick.

“They will gut everything out of this building – the wiring, the plumbing, the heating and air, the windows. Everything will be new, more energy-efficient, and I can get Margie and Brooke out of the closet in our office.”

The new building will also create a commissioner’s conference room. 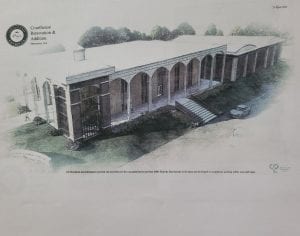 Rendering of the renovated courthouse.

The current plan is to build the new addition first and let everyone move that building. The commissioner’s office might move into the civic center. The exact details are still to be determined. After the completion of the addition, construction crews should take another nine months to finish renovating the existing courthouse.

The process will take longer than normal, but the county is saving money because it won’t have to rent trailers, sewer, internet, etc. 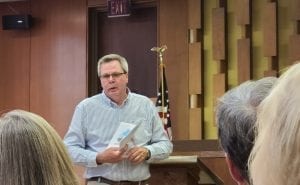 Commissioner Bradshaw thanked everyone for passing SPLOST and the Freeport tax exemption.

The Freeport Tax will put Towns County on an equal footing with surrounding counties as far as job creation is concerned.

“It will help our businesses in the future for the employees to have job creation because it will save them money on their taxes on their raw materials. It does open the door for a business to start here because we’re equal to every other county and if we put on a better sales pitch, we’ll get ‘em,” Bradshaw explained.

Around 93 percent of Georgia counties have adopted a Level One Freeport Exemption, which can be set at 20, 40, 60, 80, or 100 percent of the inventory value. According to the state of Georgia, t can apply to the following types of property: 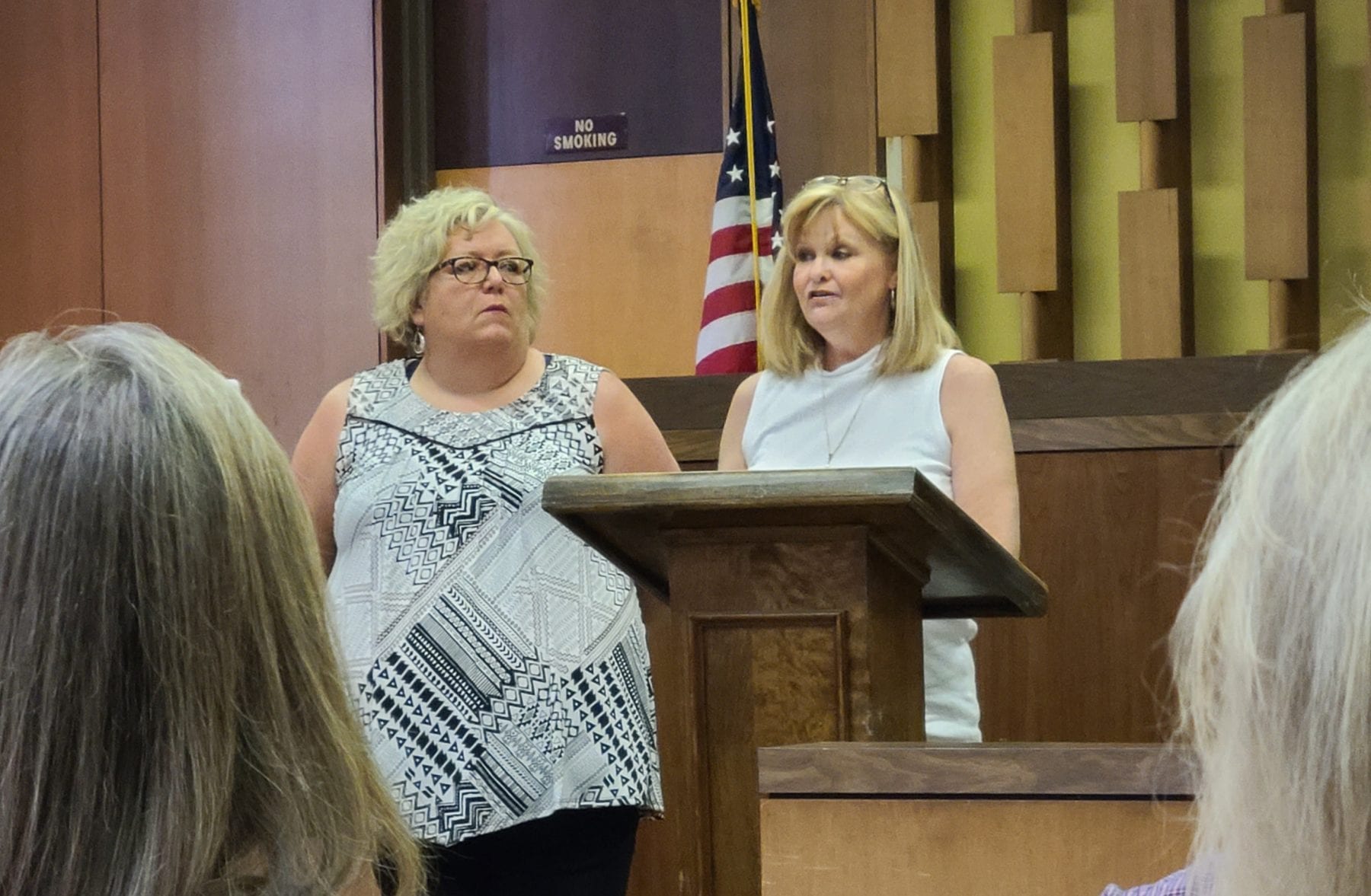 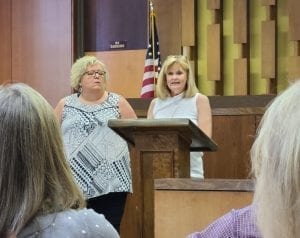 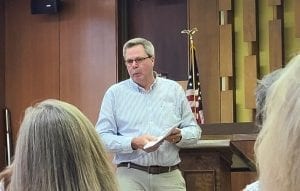 “We’re going to have a drive-thru testing site at Towns County Health Department, and it will be up and going in a few days. It will help us identify who has the virus, who doesn’t have the virus. You need to go isolate yourself or your fine, you can go back to work,” explained the commissioner.

According to Hiawassee Mayor Liz Ordiales the testing site is open and taking appointments. Please call ahead before showing up at the health department. The number is (706) 896-2265.

Fetch Your News contacted District Two MPH Dave Palmer for further details about the testing location.  However, once all the specimen collection details are worked out, testing should begin soon.

Towns and Union County Health Department staff are being trained in COVID-19 testing protocols, and the Towns location will serve citizens from both counties.

“Specimen collection will take place at the health department and specimens will be sent to a lab for testing. Test results average 24 to 48 hours, explained Palmer. “The process will require an appointment. Individuals who have symptoms are asked to call the health department. A nurse will screen callers and then submit the information to a scheduler who will call the individual with a time to come to the specimen collection site.”

Those who take a COVID-19 test will receive a phone call with the lab results. All positive patients will work with a nurse regarding contact tracing.

How Towns received a testing location

“I said can we not please get a testing site on this side of the mountain? We’ve got elderly folks here who are sick, and [they don’t feel like driving across the mountain.] To be honest with you after watching the local news and all this stuff about testing sites, I thought it would probably be impossible,” admitted Bradshaw.

At 5 p.m., Logan called back and confirmed Towns County could receive its own drive-thru site.

For those with questions about the testing site, call the health department at 706.896.2265.

“I’m very, very proud that we’re able to get this done,” said Bradshaw. 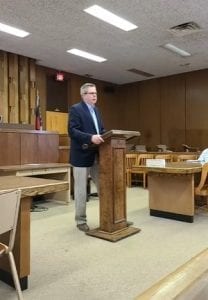 He thanked everyone who made it possible including Wilkinson, Logan, Laura Ide, the office manager health department, Hiawassee Mayor Liz Ordiales, Young Harris Mayor Andrea Gibby, and all the people involved in making it happen.