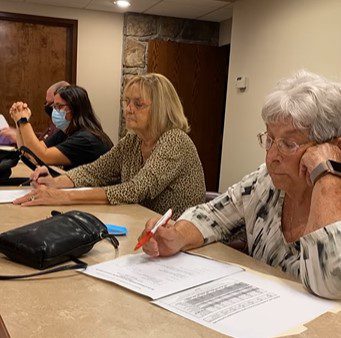 HIAWASSEE, Ga – Hiawassee City Council moved to accept the rollback on the 2021 millage rate at 1.977 mills in a three to two vote.

Councilmembers Anne Mitchell and Patsy Owens opposed the lowering of the millage rate.

“We’re gonna get to the point where we don’t have any money coming into the city,” Owens stated. “Then what are we going to do? Have a cakewalk?”

Mayor Liz Ordiales added she thought Hiawassee lost its chance to bring more money into the city in 2017 when Hiawassee picked up $5 million in unaccounted-for funds. It set the city back financially.

Maintaining the current millage rate only adds $8,000 to the property tax collections. The current rate is 2.067 mills. It’s continued to steadily decline since 2017, dropping from 2.258 mills over time. The gross digest climbs year over year, however.

Mitchell agreed with that assessment but stated that they’re “no reason” for Hiawassee’s taxes to be that low.

LOST collections account for a large portion of funds for Hiawassee. Without visitors in the community contributing to LOST, the millage rate would be significantly higher. Last year, $250,689 came from LOST.

The public hearing for the 2021 millage rate will be on September 27, prior to the work session. The second reading and acceptance will be on October 5.

Hiawassee collects its property taxes, not the tax commissioner. The city decided to move the collections in-house to save money.