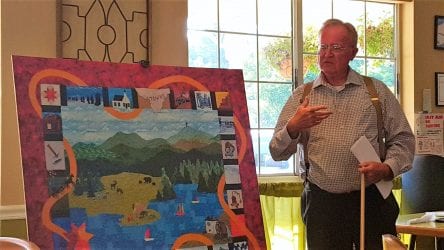 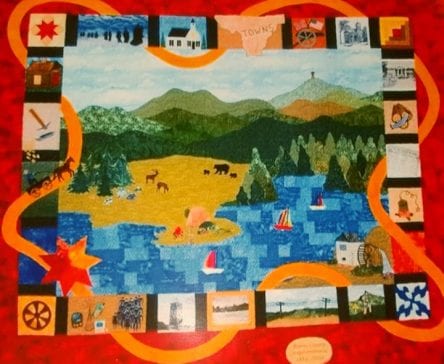 HIAWASSEE, Ga. – On Friday, June 21, Historian Jerry Taylor led the Mountain Movers and Shakers on a journey through Towns County’s heritage, as depicted on an artistic quilt designed to wind its path from past to present.
The 2006 quilt was woven in honor of Towns County’s 150 anniversary by Misty Mountain Quilters Guild, and it is currently displayed as a teaching tool for educators at Towns County Elementary School. Taylor began the presentation by explaining that the golden thread that weaves its way around the quilt represents the Unicoi Turnpike which once served as a trade route through Cherokee territory.

The historian directed the group’s attention to the patches within the quilt, beginning with the arrival of newcomers who sought fabled wealth through gold mining, the forced removal of the Cherokee tribe on the infamous Trail of Tears, the formation of Towns as a county entity, the turmoil of the “un-Civil” War, the establishment of the area’s oldest chapel – Macedonia Baptist Church -and the origins of education. The voyage continued with the history of the logging industry which stripped virgin forests near Tate City bare, the introduction of information through a local printing press, the trade of illicit moonshine, the arrival of the Appalachian Trail, and the creation of Lake Chatuge through the Tennessee Valley Authority. The tale continued with the construction of the county’s premiere hospital, the foundation of Brasstown Bald as a state park, and lastly, the influx of settlers during the modern age of communication. The blazing, seven-pointed star represents the Cherokee clans, Taylor said, and the four corners of the quilt honor the Appalachian tradition of quilting itself.

Taylor shared colorful stories of families of old along the way, entertaining listeners with his range of knowledge. Mountain Movers and Shakers gather each Friday at 8 a.m. at Sundance Grill. Community speakers inform the open public on a variety of topics of interest.