Towns County is home to Georgia’s highest summit, Brasstown Bald, towering high above the surrounding valleys at an impressive altitude of 4,784 feet.

The area was once inhabited by the Cherokee Indian tribe, dwelling in a village located approximately five miles west of the mountain peak. Once known as Enotah, Brasstown Bald boasts a fascinating Cherokee legend, reminiscent of the biblical account of Noah’s Ark. The tale tells of a great flood that once swept through the region, prompting members of the tribe to craft a great canoe as a means for survival. According to the legend, as the waters swiftly rose, the canoe eventually settled on Brasstown Bald. The Cherokee planted crops on the mountain peak, which was cleared of trees by Unetlanvhi (“The Creator”) and in time, the survivors repopulated the tribe. 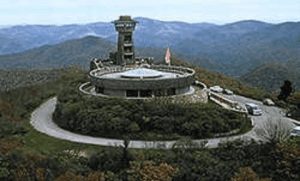 A second version of the Cherokee legend gives an alternate explanation for the origin of the bald. The tale tells of a horrifying flying monster that dwelled on a cliff on the mountain. The creature swooped into surrounding villages, stealing children in its massive claws, and terrorizing the people. Unable to reach the beast’s den, the Cherokee pleaded for Unetlanvhi to intervene.The Creator responded with a powerful lightning bolt that destroyed the monster’s home, blasting the trees from the peak of the mountain. The tribe offered praise for many days following the miraculous event, and Unetlanvhi promised that the mountain summit would forever remain clear of trees to prevent such a beast from lurking there again.

The Cherokee remained in what is now Towns County until the tribe was forced westward on the Trail of Tears in 1838.