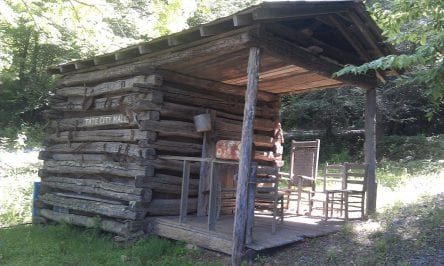 TATE CITY, Ga. – Tate City, a tiny town with a population of 32, was the topic of discussion at the Towns County Historical Society’s monthly meeting on Tuesday, Aug. 13, 2018. Historical Society President Sanda Green announced that it was the largest turnout to date, with 110 names penned on a sign-in sheet. 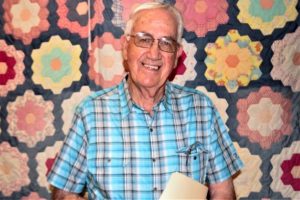 Mr. Nichols’s father grew up in Tate City, as did the generations that came before him, and Nichols had a vivid recollection of days spent in the speck of a city. Nichols grandparents, James and Mary Rogers Nichols, married in 1893, and his grandfather farmed and raised livestock in the valley to provide for his family. Nichols’s grandmother was said to be part-Cherokee, and served as a mountain midwife and medicine woman, traveling by mule over the rugged mountain ranges to assist patients in need of care.

Nichols shared a fascinating story of a time when he stepped on a rusty nail as a child, and a dire infection set in. According to Nichols, his grandmother directed family members to find a sassafras tree in the woods, and bring back the bark and roots to boil as a remedy. Once it had been boiled into a soggy mush, Nichols recalled that his grandmother placed the remnants between two pieces of white cloth, and tightly wrapped his infected foot up to heal.

“The next day, my foot was almost as white as that piece of paper right there,” Nichols said with a smile, pointing to a page of notes. Nichols shared his grandmother’s tried-and-true remedy for toothaches as well, involving parched baking soda. A book in which Mary Nichols wrote her recipes of ailment cures sadly disappeared shortly after her death, allegedly taken to the state of Virginia by Nichols’s aunt. “She had a record of all the babies she brought into the world, and all the people she doctored,” Nichols said. 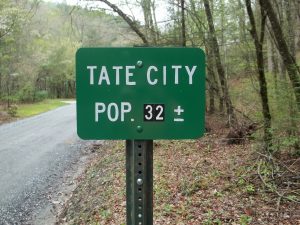 Nichols told the attentive crowd that although versions of the story differ – with one claiming that Grandmother Mary walked to Gainesville, and another variation saying that she rode her trusted mule – that the medicine woman eventually traveled to Gainesville, Georgia, and caught a train to Atlanta in order to become a licensed medical professional. Nichols said that during the winter months, his grandmother would, at times, have to be chipped from her riding stir-ups by the towns people, which had frozen her boots to the mule gear after crossing through icy creeks.

Nichols shared memories of loggers moving into Tate City during the yesteryears, and buying land for a mere two dollars per acre, in order to acquire the virgin timber. Miners arrived as well, in search of rubies. Nichols said that in the early days, livestock roamed free, with the owners of cattle, hogs, and sheep marking the ears of the animals with different symbols to identify their owners. It was said that a record of the livestock, and their identifying marks, was kept on file at the Towns County Courthouse.

Nichols reminisced about walking to his grandparent’s home in Tate City with his brother, Willard, from their home near Shooting Creek, NC, as young boys. “It was just the two of us, a dog, and a .22 rifle,” Nichols said, explaining that his family had no way of knowing if the boys had safely arrived each time they set off on foot to travel an estimated ten miles over the vast mountain range.

At the conclusion of Nichols’s presentation, residents from Tate City who attended the meeting were acknowledged, adding additional facts about their beloved town. One resident said that Tate City was the last location to receive electricty in the state of Georgia, in the early 1970s, and boasts the smallest voting district statewide, with only 17 registered voters.

Tate City is located 32 miles from Hiawassee, or 16 miles as the crow flies, over Charlie’s Creek. By road, visitors enjoy a scenic route through the Southern Nantahala Wilderness, alongside the Tallulah River.