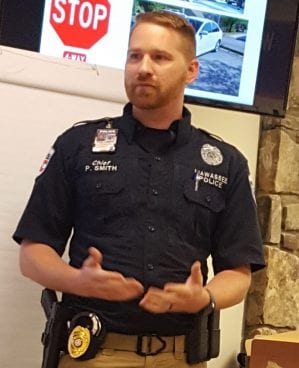 “One of the common scams that I’ve seen is called a ‘grandkids’ scam,’ Smith explained. “The person calls an area where there’s lots of retired people, Towns County, and one of the scripts they use goes something like, ‘Hey Grandma, I don’t have a lot of time to talk, but I just got arrested for a DUI. An attorney says he can get me out of jail, but I need you to wire him some money’…These people call from spoofed phone numbers. I’ve talked about that before. They can put in whatever phone number they want to show up on your caller ID…

“Another common scam is a tech support scam. I’ve had several calls in Hiawassee for that, where someone calls claiming they’re from Microsoft or Apple, and they say that they discovered a virus on the computer and need to remove it for them for a small fee, of course. Once they get access to the computer to remove the virus, they’ve got everything. They’ve got full access to the computer, and then they install a virus so that it covers their tracks.”

Chief Smith advised against falling prey to lottery scams, a ploy where a con artist claims the lottery “winner” simply needs to pay applicable taxes or import fees prior to receiving a large sum of money.

Lastly, the chief warned of scams involving law enforcement impersonation, when a caller claims to have an arrest warrant for missed jury duty or an unpaid traffic ticket. “If the police department or sheriff’s office has a warrant for you, they aren’t going to call you. They’re just going to show up and serve the warrant,” Smith said.