HIAWASSEE, Ga. – Towns County sheriff candidates and coroner contestants attended the February meeting of the Towns County Republican Party, Feb. 27. Each candidate was permitted five minutes to present an introduction speech to GOP members and visiting constituents. Newcomer to the sheriff’s race, Craig Earon, publicly announced candidacy at the Republican forum. Although present, sheriff’s contender Linda Curtis declined the invitation to address voters, explaining to FYN that she was advised against “partisan party affiliation and lobbying” by her federal employer prior to supervisory approval next week. 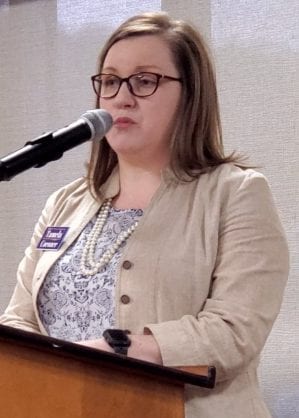 Towns County coroner candidate Tamela Cooper, who holds a degree in moratory science, was first to speak. The funeral home owner-director serves as a deputy coroner under Towns County Coroner Harold Copeland. “Since my initial training in 2013, I have attended six different annual, in-service trainings, and have taken both of their specialty classes, personalized classes. in photography and blood splatter,” Cooper said in part. “I have worked over 150 cases in the Towns County coroner’s office, and I’ve cared for over 750 decedents at my funeral home.  I have worked everything from heart attacks, strokes, and car accidents, suicides, drug overdoses, and unfortunately, child fatalities. And I use the knowledge I gained in college courses and seven years I have in experience on every case I step on…If we were standing here tonight and talking about a fire chief position, you would not see me here…One of the things I do want to bring to light is that as it stands right now if we were to have a mass fatality situation, we have a fire chief and a coroner that would be working both search and rescue and fatalities. Those two positions, in my belief, need to be different. One person can’t possibly handle all of that if we were to have that situation in our town.” 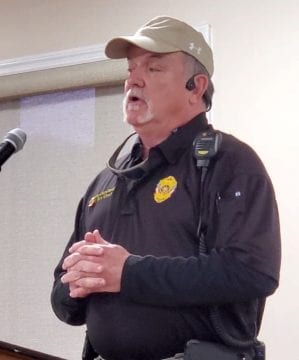 Towns County Coroner Harold “H” Copeland followed. Copeland ran unopposed in 2016, securing the seat without competition. The fire chief stated that he initially decided to run for office based on past wait time for a coroner to arrive on the scene.  “The coroner business is a brutal business,” Copeland said. “It’s like (Cooper) said when we come to your house; I’ve worked four cases this month, that’s four cases too many. And it’s not fun when we come to your house because somebody’s grandpa, somebody’s mama, somebody’s child is there. So I believe in getting in there and treating the family with respect, moving on about what has to be done, and calling Cochran’s or Banister’s which leads me to another deal,” Copeland said, falling short of alleging that Cooper’s position as a funeral home director may constitute a conflict of interest. 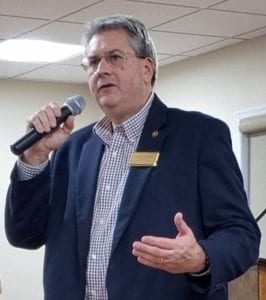 Towns County Sheriff’s Office Captain Jim Couch alphabetically led the preliminary forum. Couch began by recounting his law enforcement experience which began in 1978, including success with youth cadet involvement. “Here, I’d love to start that same program. It’s real easy to do…,” Couch said. “Now I’m with the Towns County Sheriff’s Office. I’m a captain. Right now I supervise 18 personnel. That’s patrol, investigations, school resource officers, court services. All those personnel, I do supervise. Four more are part-timers. Before that in White County, I supervised up to 30 personnel. I know how to supervise folks.” Couch, who announced candidacy following Sheriff Chris Clinton’s withdraw from re-election, said that officers enjoy working under his leadership because he does not “yell” at them. “I support my people, and I’ll do what I need to help those people advance in their career to meet their goal.” Couch concluded by stating that he is not looking inside the sheriff’s office, rather, he is within the sheriff’s office looking forward. 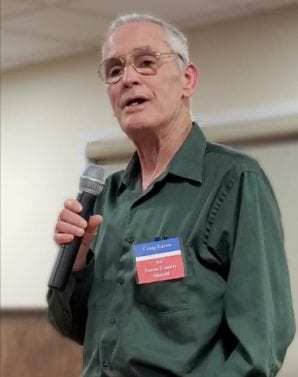 Craig Earon, the newest sheriff’s candidate, followed Couch. “Five years ago my wife and I moved here to Hiawassee from Gainesville, GA. We found this location to be paradise,” Earon began. “I’ve been retired for seven years and, of course, I get underfoot at the house and my wife wanted me to find something else to do, and I am running for sheriff.  I have a background working with most of the federal agencies; FBI, NSA, the U.S. Patent Trade Office, primarily security stuff for their systems. I’ve always enjoyed my work with long hours and never afraid to put in the extra hours necessary.” Earon said that his work history includes Fortune 500 employment, and explained that his law enforcement experience consisted of assisting an officer with warrant delivery in Norcross, GA. “I’m a quick learner. I do not have a law enforcement background, but I can tell you, I’m a quick study and I’m willing to put the hours in to get it done…When I heard that Chris Clinton was leaving, I wanted to at least throw my hat in to try to fill the void, and I believe I can do that.” Earon closed with a Ronald Reagan quote on law enforcement. 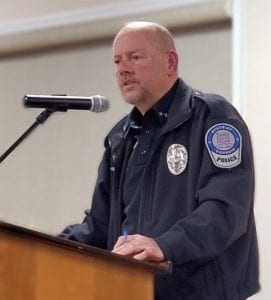 Next up was sheriff’s contender Kenneth “Ode” Henderson. “If I’m elected your sheriff, I want to make sure that our officers are getting at least 40 hours of training each year,” Henderson said. “Now, Georgia only mandates that we do 20 hours, but I want to make sure we do at least 40. I hope that we can do more than that.” The Young Harris College police chief noted implementing “community-orientated type training,” along with the continuation of CLEA. Henderson stated that he plans to work in cooperation with local and surrounding law enforcement agencies, and intends to maintain state accreditation. The sheriff’s candidate spoke on creating a local, anonymous drug hotline and applying funds from seizures as reward incentives. Henderson reiterated wanting to change the pattern of current patrol cars to black-and-white to increase visibility and the value of a cadet program. “I want to reach out to our young folks. I want to work with them. I’ve done that for 38 years and have wonderful rapport with our students in working with them and want to do that in Towns County with ours. I want to keep drugs away from them, and we’re going to hire professional drug agents…If you’re selling drugs in Towns County, Towns County Sheriff’s Office is coming for you, and I promise you that. That will be our number one priority.”  Henderson assured that he will enact an open-door policy if elected. 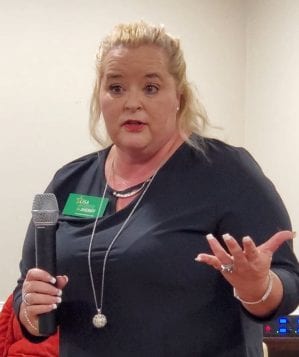 Towns County Sheriff’s Office Corporal Lisa Joseph addressed constituents. “I do not bring as many years of experience to the road as some of my opponents,” Joseph explained. “What I do bring to the table is I have two Master’s degrees. I have a Master’s degree in Criminal Justice and a Master’s degree in Education, and you may ask yourself, what does that mean to you? What it should mean to you is that I can teach law enforcement as it applies today.” Joseph claimed that if law enforcement is conducted the way it was in past decades, it could lead to “lawsuits or jail time,” adding that a “fresh” approach is needed. “Law enforcement changed and we have to be able to change with it.” The patrol deputy said that animal control is an issue raised regularly in the community. “That’s a simple issue that all of us, including the commissioner’s office, can work together to have animal control,” Joseph said, moving on to say that she intends to retain the “high standards” within the sheriff’s office, including state accreditation. 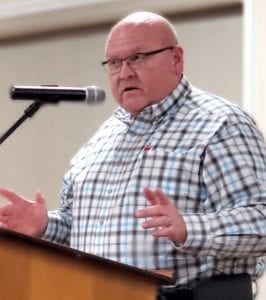 Lastly, sheriff candidate Daren “Bear” Osborn took the podium. “I’ve lived here in Towns County my entire life, born and raised here. I’ve been in law enforcement for 33 years,” Osborn began, listing experience serving with several departments and education in management and supervisor training. “I know why many of you moved here…We, as citizens of Towns County, want to keep our county safe, do we not? That’s why we moved here, and I am running for sheriff to keep this county safe. We have crime. It’s no secret. We have crime everywhere, and we’re going to attend to that problem. Drugs are our number one problem here in the county, and when you have drugs, you have thefts and burglaries. I’m an investigator in Union County at this time, lieutenant over property crimes,” Osborn said. “You have it in Towns County, you have it in Union County. I am, when elected sheriff, going to get back into the drug task force, actively. I’m not going to sit on the sidelines and let drugs take over this beautiful community.” Osborn acknowledged that opponent Henderson is equally passionate on the subject of drug enforcement. “Either one of us are going after the drugs. I guarantee you.” Osborn shared that his brother was killed in a car accident, the result of a driver being under the influence of drugs. “You can say it’s personal. Yeah, it’s personal. I don’t like drugs. I don’t like drivers that’s on the road drinking. I’m not going to tolerate that.” Osborn added that our youth is our future, and vowed to work “day and night” to “stop the problem we have here.” 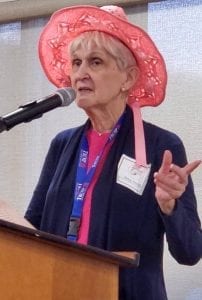 All contenders plan to run on the Republican ticket in the General Primary, May 19.