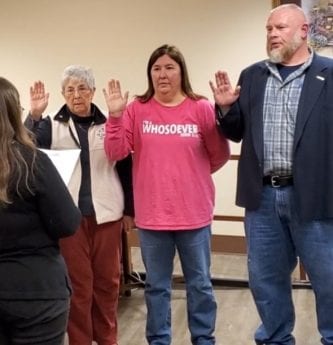 Chastain, Mitchell, and Noblet each swore to the following oath in unison:

“I do further solemnly swear and affirm that I am not the holder of any unaccounted for public money due this State or any political subdivision or authority thereof; that I am not the holder of any office of trust under the government of the United States, any other state, or any foreign state which, by the laws of the State of Georgia I am prohibited from holding; that I am otherwise qualified to hold said office, according to the Constitution and Laws of Georgia.
So help me God.”

Hiawassee Mayor Liz Ordiales indicated at the ceremony that she had met with returning Councilman Jay Chastain Jr. earlier in the day to discuss subjects that have “been lingering for a while that (Chastain) has history for.” Chastain nodded in agreement with the mayor’s announcement.

Mayor Ordiales additionally announced that the Department of Transportation has agreed to install a crosswalk on State Route 76, leading across from Chatuge Regional Hospital. The mayor said that the hospital will fund their side of the roadway, with the city funding the southern side to ensure that the curb is compliant with the Americans with Disabilities Act. Ordiales estimated the cost to the city at approximately $3,000.

Hiawassee City Council will meet for its work session on Monday, Jan. 27, at 6 pm in the upstairs training room at city hall. Mayor Ordiales is expected to present the City of Hiawassee’s 2019 “Year-in-Review” at that time.