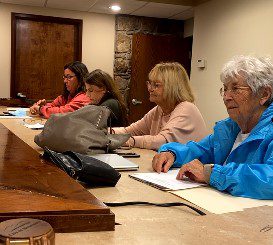 If ultimately approved, the position would be part-time, three days a week at $20 per hour. The role would be around $24,000 a year. Hiawassee wants someone with experience in a similar role. The council moved to table the role until more information was available and the entire board was present.

Some of the salary money would come from the hotel/motel tax. The taxes can also be included in the general fund for advertising or events in the city. The last state legislative session included a law that rental properties such as AirBnB needed to pay rental tax in the city limits.

However, Ordiales is comfortable in hiring the position and that Hiawassee can cover the cost without the updated hotel/motel tax law. She stated she wouldn’t have presented it otherwise.

“If you don’t want it that’s fine. We’ll just have to ease up on all these projects we’ve got going on because it’s impossible for one person to do it. I mean that’s basically where we’re at,” Ordiales added. “We’ll just have to figure out what to back away from.”

Ordiales added that ideally the person would probably be retired with experience in economic development, but they didn’t need benefits. She also said she hadn’t spoken with anyone about the job.