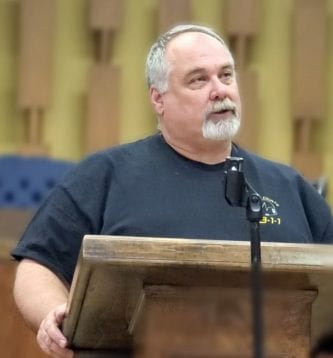 HIAWASSEE, Ga. – Towns County 911 Director Marty Roberts brought the community up-to-date on the progress of the upgraded equipment and renovations to the Emergency Operations Center during the February commissioner’s meeting.

“We’re excited at 911. There’s a lot of things happening down there that are just wonderful,” Roberts said. “Everything looks great. The dispatchers are really excited about the new upgrades. We’re ahead of schedule on going live with our CAD. We started our training last week. We were in training for four days. We’ve got two more weeks of that and then we’ll be cutting live on the 24th of March. So we’re really excited about that.”

Roberts confided that the renovations have not been a simple task, however, considering that the 911 center is operational at all times. In addition to a lease agreement with AVTEC for the radio console systems, a contract with Quality Recording for a recorder to preserve the audio of 911 calls was signed by Sole Commissioner Cliff Bradshaw.

“The radio console, it’s not actually a radio,” Roberts continued. “It’s actually a computer system hooked to radios which allows the dispatchers to combine different frequencies to talk to the fire, EMS, SO at the same time. So we don’t have to talk to one and then talk to the other. It allows us to do our tones that we dispatch to alert the fire station or the ambulance services when we have a call.” Roberts said that the upgraded system will increase the speed of emergency dispatch.

A five-year lease agreement was entered with AT&T in November, in conjunction with West Safety Services, at a cost of $4.260 per month for the emergency telecommunications service. Commissioner Cliff Bradshaw explained that while the county considered purchasing the service, the lease agreement proved to be the better bargain due to maintenance and service costs associated with an owned system.

Bradshaw previously signed a contract in July 2019, upgrading the county’s computer-aided dispatch (CAD) system for emergency services. Towns County 911 explained that the improved system will be custom-tailored to Towns County. The cost of the enhanced CAD system totals nearly $213,000, a price that Bradshaw defined as a “tremendous amount of money.” The charge is roughly half of the amount that the commissioner expected to spend on the program upon taking office, however, and Bradshaw expressed approval, referencing computer-aided dispatch as “the heartbeat of 911.”

“There are times when leasing is more cost-effective because the maintenance of this equipment is included in the lease,” Bradshaw said on Tuesday. The new console system will cost $2,983 per month which includes maintenance, whereas it has cost $1,055 per month in maintenance alone without parts included for the 12-year-old system. “We’re not only upgrading all of the technology and equipment down there, we’re also remodeling the interior of the building,” Bradshaw added. “New floor coverings, ceiling, tiles, paint, and it’s going to look very nice.”

The commissioner said that the public will be invited to view the renovations to the 911 Center once the project is complete.