YOUNG HARRIS, Ga. – Emergency 911 operators are a literal lifeline for those in need of assistance from law enforcement, fire departments, or urgent medical services. Annually adopted, April 14-20 marked “National Telecommunications Week,” a period set aside to recognize the crucial, behind-the-scene duties conducted by dispatchers. Towns County 911 hosted a barbeque dinner, complete with southern side dishes, at the Emergency Operations Center in Young Harris, April 22, in appreciation of the difficult, demanding jobs our local 911 operators perform. 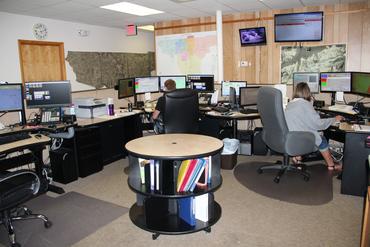 Towns County dispatchers serve 12 hour shifts, with two operators assigned per stretch. One dispatcher receives emergency calls while relaying pertinent information to their partner. The second operator “tones” and transmits the details to the appropiate first responder units. At times, dispatchers find themselves juggling multiple calls, all the while remaining calm and composed despite the magnitude of a crisis.

“They’re locked in this room, twelve hours a day, and there’s times when there’s a lull, but when it gets busy, it’s just crazy,” 911 Director Marty Roberts told FYN. “They work really hard, and people kind of forget about them because they’re in here. When we have something like this, when we can recognize them, we let them know that we think about them, and acknowledge that they do a hard job. We’re proud of them. I’ve got some of the best dispatchers in the country. I’d put them up against anybody. They do a wonderful job.”