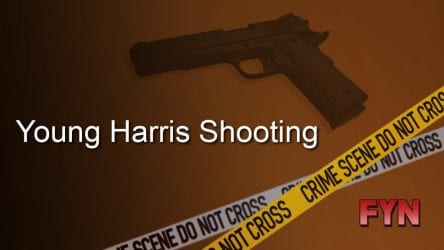 YOUNG HARRIS, Ga. – Limited details released by authorities surrounding the recent shooting of Dawn Thurman Wright have puzzled a community concerned with Wright’s well-being and their own sense of security.

As previously reported, Wright – the ex-wife of late Hiawassee Police Chief Jimmy Wright – suffered a non-fatal gunshot wound at a residence on Chicken Pit Road in Young Harris during the early morning hours of Tuesday, Dec 3, following what was later described to authorities as a three-man home invasion. According to the Towns County Sheriff’s Office, Wright’s neighbor summoned emergency responders at 5:35 a.m. on Wright’s behalf.

FetchYourNews (FYN) has since learned through sources that Wright purported that she was forced to consume pill medication by the unidentified male subjects, prior to sustaining the bullet wound to her left shoulder. As a result of the gunshot, Wright was transported to Northeast Georgia Medical Center with non-life threatening injuries for medical treatment.

While county law enforcement has asked the public to report suspicious activity in the area of the alleged attack,  descriptions of the involved perpetrators have not been issued, nor identifying details of a getaway truck which was allegedly utilized in the commission of the crime. “The weapon believed to have been used has been recovered,” Towns County Chief Deputy Terry Conner divulged, however, in a press release issued Dec. 6. Conner did not indicate where the retrieved handgun was located.

The GBI, who is assisting Towns County Sheriff’s Office in the investigation, has remained equally tight-lipped on the circumstances surrounding the incident. Special Agent in Charge of Privacy and Compliance Brad Parks responded that information requested by FYN is “not subject to dissemination until the investigation is concluded, which may also include prosecutorial actions and the appeals process.”

The shooting investigation remains open and active at this time.

Towns County Sheriff’s Office continues to ask anyone with information on the case to dial 706-896-4444.