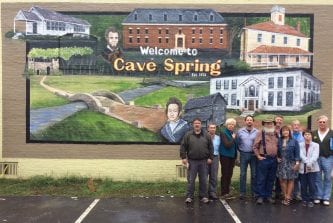 Georgia Mountain Trail states its mission is “to create great art and help others create great art, one person or city at a time.” The goal is to link public artwork via a “trail” near welcome centers throughout Georgia, hugging the state’s border. The company says that while the design process involves months of planning, murals are typically completed within two weeks to a month of application. 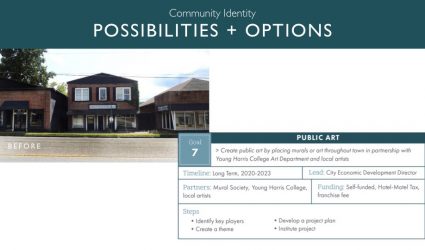 A portion of Hiawassee’s strategic plan includes adding public artwork in the city.

“The Georgia Mural Trail first mural city was the city of Cave Spring. Even though there are hundreds of murals in the state. Our focus are smaller cities. We have painted murals in many other cities this one was the first under the mural trail concept. The mural trail concept is fluid and always changing and growing. We are always adding ideas to the trail. One thing you will notice is that the murals are getting much larger and more complex.”

Hiawassee’s Joint Economic Developer Denise McKay hinted at October’s Downtown Development Authority meeting that two location sites for murals had been tentatively identified, one being that of the building of the former “$2 store.”

Hiawassee City Council assembles for work sessions at 6 p.m. on the last Monday of each month.