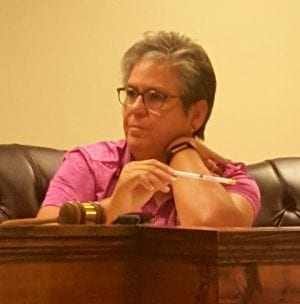 HIAWASSEE, Ga. – Hiawassee City Council tabled an agenda item Aug. 6, proposed by Hiawassee Mayor Liz Ordiales, to purchase a used ice vending machine, not to exceed $25,000, for Mayors’ Park, located east of the city limits on State Route 76. The popular city park offers boating access to Lake Chatuge. Council members opposed taking action on the purchase at this time, citing concerns such as the high-dollar cost, maintenance upkeep, fear of vandalism, and the fishing season coming to a close as reasons to delay a decision until spring of next year.

“It was just brought to me as a good idea and a potential to get that ice machine,” Mayor Ordiales replied, adding that the cost of a new machine was estimated at $60,000. “We don’t have to get it now, but you know, it seems there might be an nice machine available for that amount of money. If we don’t want to do it, I’m okay with that. I don’t think the city is going to make any money off of it. It would just be a good service for the people who launch their boats there to get their ice there.” Ordiales included that although the potential purchase was not intended to be a money maker, the mayor believes the city would recuperate the cost of the vending machine within a year or two.

Hiawassee City Council approved a grease trap training and inspection contract for $5,500, updated utility billing and accounting software with Black Mountain Software which is not to exceed $25,000, Intercity Fund Debt Forgiveness for water treatment in the amount of $583,861, an extension of the Towns County Water Authority Service Agreement to begin billing additional water consumers for sewer usage, and Downtown Development Authority (DDA) Activation.

FetchYourNews is awaiting a returned records request from city hall containing the names of the members selected to serve on the DDA board.