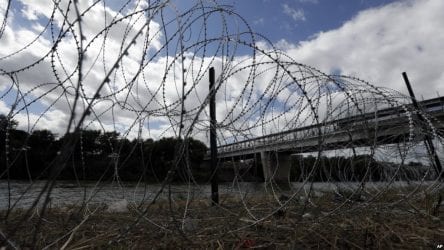 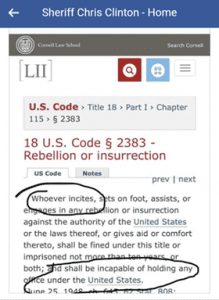 Sheriff Clinton maintained that the caravan is a choreographed invasion spun into play by left-wing operatives in an effort to gain a tighter chokehold on the future of America. The sheriff adamantly reiterated that violent gang members, specifically those affiliated with brutal El Salvadorian MS-13, are among the South American insurgents seeking entry.

The brazen sheriff stressed that the threat of political violence erupting, propelled by radical agitators, is a legitimate cause for consternation.

“Invasion is an act of war,” Clinton asserted, referencing 18 U.S Code § 2381, adding that government officials aiding in an insurrection are subject to charges, “Treason is punishable by death, but certainly you can’t hold office.”

Sheriff Clinton openly admitted that his unwaivering posture has drawn harsh criticism from detractors. “They hate Towns County. They hate me,” the sheriff stated, divulging that he has been accused of fear mongering, “I don’t do this job to keep me safe…I love America, I love Towns County, and I stand bold.”

In addition to speaking on gangs and the migrant caravan, Clinton discussed gun laws, the opioid epidemic, and the recent midterm elections.

Fetch Your News is a hyper local news outlet, attracting more than 300,000 page views and 3.5 million impressions per month in Towns, Dawson, Lumpkin, White, Fannin, Gilmer, Pickens, Union, and Murray counties, as well as Cherokee County in N.C. – FYNTV attracts approximately 15,000 viewers per week and reaches between 15,000 to 60,000 per week on our Facebook page. –

For the most effective, least expensive local advertising, call 706-276-6397 or email us at [email protected]