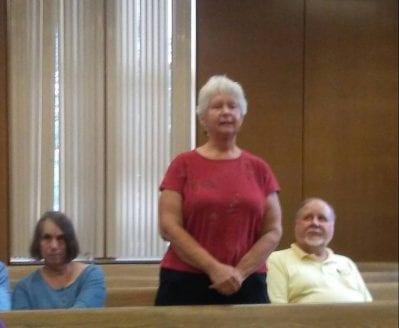 “This is my first time here at a commissioner’s meeting, and there’s three things that I have on my mind, and I don’t know exactly how to bring them up to the commission or how to get them on the formal agenda so that people can talk about them” Stroub said, “One is getting liquor in Towns County, being able to have package stores. How do we go about that? Is it something we can get a referendum for? Is it something we can vote on? Because I’ve heard that there’s, like, Hayesville, the package store there makes over $500,000 a year in taxes.”

In keeping with his campaign promise, Commissioner Bradshaw intends to include liquor-by-the-drink on November’s ballot, which would allow establishments to serve spirits. However, the commissioner has no plans to initiate a vote for a full liquor store.

“That’s a lot of money. It is. I agree with that,” Bradshaw said, referring to Hayesville’s tax revenue, “I had a group in here the other day that was asking about package stores, and I heard some of them sitting out there talking. I could overhear them talking about where they buy their wine, and they go to Walmart instead of Ingles because it’s cheaper. So I’m just saying that we would love to have a Walmart. There’s a lot of things we’d like over here that would bring more money in. I’m not sure that a package store is a route the county wants to go.”

Bradshaw informed Shroub that the city of Hiawassee is presently attempting to gather enough signatures to add a package store referendum on November’s ballot. “They may get enough (signatures) in the city. I don’t know. I know they’re working very hard over there,” Bradshaw said.

Commissioner Bradshaw went on to say that nearby White County does not have package stores, although the town of Helen does, due to the county finding liquor stores to be a hassle. In addition, Bradshaw stated that Towns County is financially secure, and does not require the revenue that a package store would provide, adding, “This county, as a whole, just doesn’t have an appetite for it.”

Liza Stroub inquired whether a petition could be circulated to force a vote onto the ballot. Bradshaw replied that it could, and stated that he would contact Towns County Attorney Robb Kiker in order to learn the specifics involved.

In the case of Hiawassee, 35 percent of registered city voters must sign a petition in order for the referendum to appear on the ballot. The deadline to submit the petition to the Towns County Board of Elections is August 8.

Additional concerns raised by Shroub consisted of a perceived lack of animal control in Towns County, followed by a complaint of abandoned vehicles on property, along with litter on roadways, with Shroub stating there is trash “all over the county.” A citizen who attended the meeting with Shroub agreed, citing Tallulah River Road as heavily littered.

“We don’t have trash all over the county. I beg to differ on that. There is trash, but to say it’s all over the county is an overstatement,” Bradshaw rebutted, later stating to FetchYourNews that the Department of Transportation and detainee crews are deployed to contain litter on state and county roadways.

Of note, Town County participates in Clean Sweep Week annually in April. The most recent event yielded 240 bags of litter.

The civil discourse concluded with Bradshaw promising to include the issues of discussion on a future agenda, and Shroub vowing to return with a crowd in tow.

Commissioner Bradshaw will hold his next monthly meeting on August 21, at 5:30 p.m. at the Towns County Courthouse.