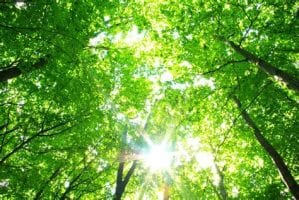 HIAWASSEE, Ga. – The City of Hiawassee has adopted yet another mandate, this time a tree ordinance which has the potential to impact the owners of private property. A “City Tree Board” has been appointed, and while the bulk of the responsibilities entrusted to the committee involves the cultivation and maintenance of trees located upon city property, the ordinance includes a clause pertaining to trees growing on privately-owned land. 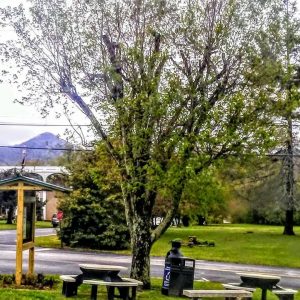 A maple tree, days before removal, which once stood on Hiawassee Square

The decree was brought to the attention of FetchYourNews (FYN) by a citizen at a recent town hall meeting. FYN filed an open record request with City Hall to review the ordinance, and spoke briefly with Hiawassee Mayor Liz Ordiales on the morning of Thursday, June 21. Ordiales noted a massive, trimmed evergreen located on the county courthouse grounds as an example of the ordinance. “That’s what we don’t want,” Ordiales said, referring to resulting appearance from the tree-topping technique. While courthouse staff agreed the pine is unsightly, trimming was warranted years prior due to interference with overhanging electrical lines. A maple tree was recently removed from the southeast corner of Hiawassee Town Square after the tree was deemed dead, and according to Mayor Ordiales and Hiawassee Attorney Thomas Mitchell, allowing the tree to remain posed a liability risk to the city.

While the location of the removed maple was unquestionably on city grounds, listed among the regulations in the ordinance is a section entitled “Removal of Dead or Diseased Trees” which states:

“The city shall have the right to cause the removal of any dead or diseased trees on private property within the city, when such trees constitute a hazard to the persons and property, or harbor insects or disease which constitutes a potential threat to other trees within the city. The City Tree Board will notify in writing the owners of such trees. Removal shall be done by said owners at their own expense within sixty (60) days after the date of service of notice. In the event of failure of owners to comply with the provisions, the city shall have the authority to remove such trees and charge the cost of removal to the owners.”

The ordinance advances to declare that interference with the City Tree Board – on public or privately owned property – is unlawful, and violation of any provision within the mandate shall be subject to a fine “not to exceed one thousand dollars.”

Upkeep of trees on private property, which could endanger the public or impede access through city right-of-ways or streets, are listed in a separate segment of the decree.

The first reading of the ordinance was approved May 1, 2018, by Council members Anne Mitchell, Kris Berrong, Amy Barrett, and Nancy Noblet. Councilwoman Patsy Owens was absent from the meeting. “It basically says that we’ll have trees in Hiawassee, and that we’ll take care of them,” Mayor Ordiales alluded at the previous work session.

A finalized signature sheet is expected at the city’s monthly work session Tuesday, June 26, at 6:00 p.m. While said meetings typically fall on the last Monday of each month, the June session was rescheduled due to a training trip for city staff.