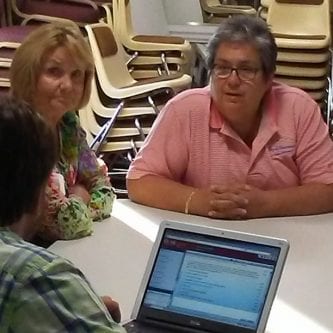 HIAWASSEE, Ga. – Dozens of community members and government officials gathered at the Towns County Civic Center on the evening of Tuesday, June 12, to discuss their visions for Hiawassee’s future. The City of Hiawassee has been working closely with the Carl Vinson Institute of Government, a unit of the Office of Public Service and Outreach at the University of Georgia, which assists state and local governments in achieving goals. Hiawassee received a $30,000 Appalachian Regional Commission (ARC) grant in 2017 to fund the study. Steering committees were chosen for the strategic planning endeavor, and previous meetings took place to gain insight.

Many in attendence praised Mayor Ordiales, with some referring to the elected offical as “progressive-minded.”

Table-top discussion groups were formed prior to the start of the meeting, and ideas were projected onto a screen from laptop computers. 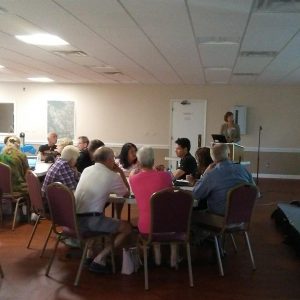 The community was divided into six groups

Listed among what is “working” in Hiawassee’s favor was appreciation for local shops, commendation of Hiawassee Police Department, the seasonal events on town square, access to reliable contractors, and the overall “quality of life” in the mountains.

Suggested improvements included an updated courthouse and post office, extended beautification efforts, the need for year-round activities, the creation of a city that will beckon visitors, a liquor store to raise revenue, the necessity for affordable housing, activities geared toward youth, improved public parking, and easily accessible recycling areas.

City annexation was noted, as well as hope for increased cultural diversity, public art displays, replacement of “tacky signs” to give the city a uniformed appearance, and a desire to deviate from a “Bible-Belt” stigma.

When asked to describe Hiawassee, some chose adjectives such as “quiet,” “charming,” and “quaint” while others described the city as “outdated” and “stuck.”

Hiawassee Councilwoman Nancy Noblet said she hopes the city will grow to become more than a retirement community. Councilwoman Amy Barrett expressed appreciation for tradition. Councilwoman Anne Mitchell used the word “bustling” to invoke her vision for the city’s future.

Carl Vinson Project Manager Jessica Varsa led the meeting, with the assistance of colleauges from the institute. Varsa relayed that another forum may take place next month, with efforts expected to wrap up in November.

“I want to see the city grow, but I also want it to remain a small-town because it’s home,” said Towns County Sole Commissioner Cliff Bradshaw, a planning committee member.