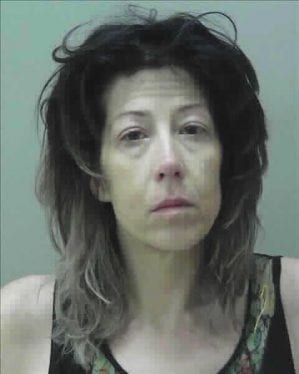 HIAWASSEE, Ga. – On Tuesday, May 8, 2018 at approximately 3:15 p.m., Hiawassee Police Department Detective Brandon Barrett observed a subject known to have an active arrest warrant, driving eastbound on South Main Street. Detective Barrett was on patrol at the time the subject was spotted.

After initially stopping for the officers, the driver of the vehicle made a U-turn, striking the front of Detective Barrett’s patrol vehicle.

The driver, Angela Michelle Capozzoli of Hiawassee, proceeded to flee westbound on South Main Street at a high rate of speed.

Hiawassee Police Department and Towns County Sheriff’s Office pursued the fleeing vehicle to Bugscuffle Road, where Capozzoli struck both patrol vehicles with her vehicle, disabling one.

Hiawassee Police Department continued to pursue Capozzoli to Bugscuffle Spur, where the subject turned onto a dirt road, unable to proceed in the occupied vehicle.

Capozzoli exited the vehicle, fleeing on foot into a heavily wooded area where officers lost contact .

“I am incredibly thankful that no one was injured during the pursuit,” Hiawassee Police Chief Chief Paul Smith said, “Acts of aggression towards law enforcement officers of this extreme are rare in Hiawassee, but obviously not impossible. Working together with the Towns County Sheriff’s Office, we were able to apprehend and bring charges against Capozzoli.”

Fetch Your News is a hyper local news outlet that attracts more than 300,000 page views and 3.5 million impressions per month in Dawson, Lumpkin, White, Fannin, Gilmer, Pickens, Union, Towns and Murray counties as well as Cherokee County in N.C. FYNTV attracts approximately 15,000 viewers per week and reaches between 15,000 to 60,000 per week on our Facebook page. For the most effective, least expensive local advertising, call 706-276-6397 or email us at advertise@FetchYourNews.com