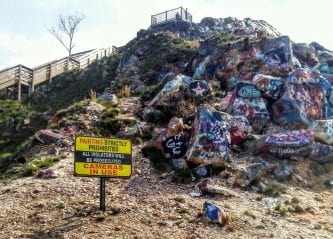 HIAWASSEE, Ga. –  Two juvenile females, 16, were arrested and charged with one-count criminal trespass Tuesday, May 1, at Bell Mountain Park. The charges stemmed from a report called in by a witness, stating that an act of vandalism had occurred. Towns County Sheriff’s Office deputies quickly responded to the park, arriving within minutes of the report.

The two juvenile suspects, along with the suspected vehicle they were occupying, were located, and the minors were charged with criminal trespass. The juveniles were released to the custody of their parents. The charges were the result of vandalism to the wooden observation deck, allegedly spray-painted by the teenagers. The suspects were not from the Towns County area.

In recent months, Bell Mountain Park has been the target of vandalism. A cash reward is being offered to anyone providing information that leads to the arrest and conviction of those responsible. Information will be kept confidential. Those with information are asked to call the Criminal Investigation Division of the Towns County Sheriff’s Office at 706-896-4444.