HIAWASSEE, Ga. – On the morning of Wednesday, March 14, a lock-down training exercise took place at Towns County School at 10 a.m.

While there was a call for a nationwide walk-out in remembrance of the 17 lives lost Feb. 14, 2018, at Marjory Stoneman Douglas High School in Parkland, Florida, many schools across the nation chose a proactive approach.

FetchYourNews (FYN) learned of the drill and hoped to highlight the positive measures taken.

In the aftermath of the Parkland tragedy, FYN has reported on the subject of school safety in Towns, Gilmer, Fannin, Union, Lumpkin, and Dawson County, Georgia, as well as Cherokee County, North Carolina.

While the ultimate safety of students is not being called into question, with FYN maintaining conviction that security is of the utmost concern for Towns County School administrators and Towns County first responders alike, unexpected questions arose during our research. 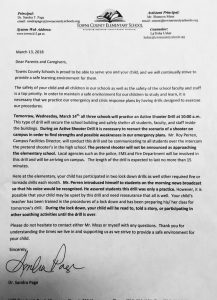 Letter sent to the parents of elementary school students

In a letter forwarded to FYN, dated March 13, 2018, and signed by Towns County Elementary Principal Dr. Sandra Page, parents of elementary school children were advised a day in advance that the drill would occur. The letter reads, in part, that “during an active shooter drill, it is necessary to reenact the scenario of a shooter on campus in order to find strengths and possible weaknesses in our emergency plans.”

The letter goes on to state that “local agencies such as the police, EMS (emergency medical services), and the fire department will be involved in this drill and will be arriving on campus.”

Following an unsuccessful, in-person attempt to acquire sufficient information on the active shooter drill from the Towns County Sheriff’s courthouse office, FYN contacted the emergency agencies listed as participants in the training exercise.

At a Movers and Shakers meeting held Feb. 23, Towns County Sheriff Chris Clinton, along with Towns County School Superintendent Dr. Darren Berrong, spoke with concerned citizens regarding school safety. The sheriff divulged that a few years had passed since an active shooter drill was conducted.

“The chief and I were just discussing this, what, a week ago maybe, that it’s about time that we do another one, and that we do it together,” Sheriff Clinton assured.

Sheriff Clinton continued, “How do we make our children safer? Now. Not some place down the road at some philosophical perfect normal for you, but right now. How do we do that? Frankly, at the end of the day, we have to make it a harder target.”

After referencing the 1999 Columbine tragedy, Sheriff Clinton asked, “What’s been done by the government to make our children safer? Not a single thing. Because a lot of people think they can get up and talk about it, and they can harp on whatever their pet issue is. I’m pro-gun, I’m anti-gun, whatever, but as long as they’re talking about it and people are listening, they are getting political mileage out of it, and they really don’t care. I’m sorry, but I care.

At the conclusion of the forum, Sheriff Clinton acknowledged a need to ensure all first responders are familiar with the school’s campus and lock-down procedure. The sheriff told those in attendance that it is up to the community to decide what level of security they want in place. “I work for you,” Sheriff Clinton reminded.

FYN contacted Sheriff Chris Clinton on the evening of the lock-down in anticipation of learning why his plans to include other emergency agencies had changed.

Sheriff Clinton failed to provide an explanation, focusing rather on garnering the individual identities of FYN’s sources. Shortly after asked if proper protocol was followed, a concern brought to the attention of FYN by an emergency official, Sheriff Clinton ended communication.

Berrong revealed that the active shooter drill was implemented between himself and Sheriff Clinton, following the Movers and Shakers forum.

When the question was posed concerning the absence of agencies, Berrong replied, “Well, (the school) wasn’t sure of everyone who was involved. I think there were some of those individuals there.” Upon learning that was not the case, Berrong stated there may have been a miscommunication in verbiage, saying, “Personally, for me, it wasn’t about the fire department. It was about the police officers.”

Berrong was then asked to recap the drill.

“At 10:00, Mr. Perren came over the announcement through all three schools and informed them we were going into a lock-down, that there would be police officers walking through the hallways, make sure to keep your doors locked, and to keep the kids in a safe area,” Superintendent Berrong explained. “While that was going on, police officers were making their rounds through the building, just to make sure they were still familiar with what the campus actually looks like, what’s going on during a lock-down, where can you go and where can’t you go in case there is a shooter in the school, and what areas can we access. They made their rounds through the school while we were in lock-down. We were in lock-down probably ten minutes. Our school isn’t a very big building, you can make a round through there fairly quickly. So ten to fifteen minutes, and pretty much that was the end of the drill.”

FYN inquired if there are plans to hold a subsequent active shooter exercise. “We may have further drills. We don’t have any planned currently,” Dr. Berrong said. “Sheriff Clinton and I are in discussion about this summer, getting together with all personnel, fire department and everyone, just to sit down and make sure everyone has plans of the school building, and make sure everyone has access to the ‘Crisis Go’ app, which alerts people when there is an emergency on campus, and just have another round-table discussion about what we are going to do when something like that happens, how do we shut the campus down. We had one of those several years ago, but it’s about time we had another one.”

FYN contacted Towns County School Facility Director Roy Perren. Director Perren relayed that the exercise was exclusively planned for the Towns County Sheriff’s Office and that there was never an intention to include other emergency agencies. The facility director added that a Towns County School meeting will be held in conjunction with the Georgia Emergency Management Agency (GEMA) April 13 concerning the involvement of all first responders, should an emergency situation arise.

Page stated that to her knowledge, the active shooter exercise was changed to simply a lock-down drill on the morning of March 14, shortly before the training occurred, excluding the need for the involvement of  agencies other than the Towns County Sheriff’s Office. “I just wanted to get the information out so that students, parents, and teachers were aware that a drill was going to take place,” Dr. Page said. “That was my main concern.”

This left FYN with more questions than answers, considering that none of the emergency agencies listed in the letter had been notified that an active shooter drill had been scheduled.