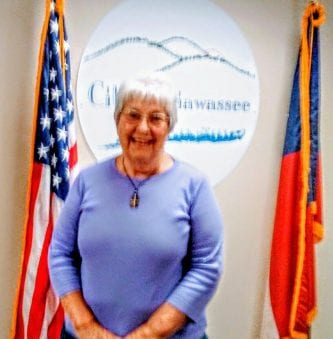 Councilman Kris Berrong, owner of Berrong’s Barbershop, stepped down from the position, citing incapacity to devote a full time presence at City Hall.

According to Berrong, the citizens of Hiawassee require someone who is readily available during City Hall’s business hours.

The councilman tells FYN he has confidence in Mitchell’s ability to handle the multiple responsibilities the position entails.

Mayor Pro Tem Anne Mitchell assured the community she will do her best.

Attendees expressed their approval with applause.

Anne Mitchell is expected to remain Hiawassee Mayor Pro Tem until a Mayoral candidate is elected in November.

The Work Session began with an update on the water leak study, a service provided at no charge by Matchpoint Inc. Approximately 45 miles of underground water lines were inspected and 11 minor leaks were detected.

Mayors’ Park was discussed, recapping the dedication ceremony which took place on August 14. An estimated 100 people were said to have attended, including the family of Pastor Harold Ledford, the park’s honoree. Harold Ledford served as pastor of Macedonia Baptist Church for 30 years and was well loved by the community. Pastor Ledford passed away on February 11, 2017.

The decision of whether to hire John Andrews, a retired architect, as project manager to complete the construction of Mayors’ Park was suspended for the time being. Council members suggested extending an invitation for Mr. Andrews to address the Board at next week’s regular monthly meeting.

Restrooms, picnic tables, a dog park, and a pier are expected to be added to the already popular recreational area.

The meeting concluded with the decision to place the potential implementation of an educational program on hold until November. Liz Ordiales, former Hiawassee Mayor Pro Tem and current Mayoral candidate, previously suggested a program designed for high school seniors and recent graduates to learn skills relevant to the travel/tourism and healthcare professions prevalent in the region. Discussion with Dr. Darren Berrong, Superintendent of Towns County’s Board of Education, appear to be ongoing.

Hiawassee City Council will meet for their regular monthly session at 6:00 p.m. on Tuesday, September 5, at City Hall.