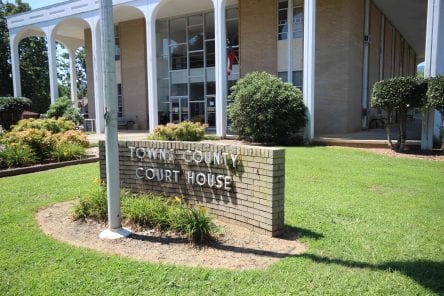 Hiawassee, Ga – The courthouse plans are almost complete and going through the final stages.

“Any day now they are going to have the plans signed off by us. Of course, we’ll let you know when all this happens,” Bradshaw commented.

However, some changes will have to be made for county operations once construction begins.

“I was thinking that we would move into the addition and when they are done remodeling, we’d move in [the courthouse,” Bradshaw explained. “They are saying that will double the time to do the whole project.”

Since then, the county is considering moving into the old recreation gym, along with all the offices that work out of the courthouse.

“We’d have plenty of parking where the public can come when we have a county meeting. There’s adequate space in there. We already have heat in there. We have air condition in half the building. We’d have to add air in the gym which would stay there when we move back to the gym,” Bradshaw stated.

How the court will operate is being worked on by the county attorney, perhaps at the civic center.

The architects are also drawing up a cubicle plan for each office so everyone will have their own space when they move.

Detainee labor will most likely be used to move the offices over on a Wednesday and finished by a Sunday evening.

“There’s a lot of work going into this, but we think it will save money and I think it will be better working conditions for Towns County elected officials and employees, than back here with parking and noise and stuff like that,” Bradshaw remarking.

The county, public safety officials, and architects are working on a state-of-the-art safety system for the new courthouse as well.

Before COVID-19, the county purchased two automated stretchers to help with workman compensation claims as well as the health of EMS employees.

The stretchers cost $59,499 for two units. It’s built on an X-frame that can raise or lower at the push of a button. The legs move independently and take the pressure off a person’s back. One EMT can take a person from a porch to the ambulance without assistance from their partner.

With an old stretcher, it takes two to three people to load someone into the ambulance. The old model weighs 160 lbs. and if a person weighed 200 lbs., an EMT’s legs would experience 360 lbs. of pressure plus their body weight.

The Ferno puts zero pounds of pressure on someone’s legs and back. 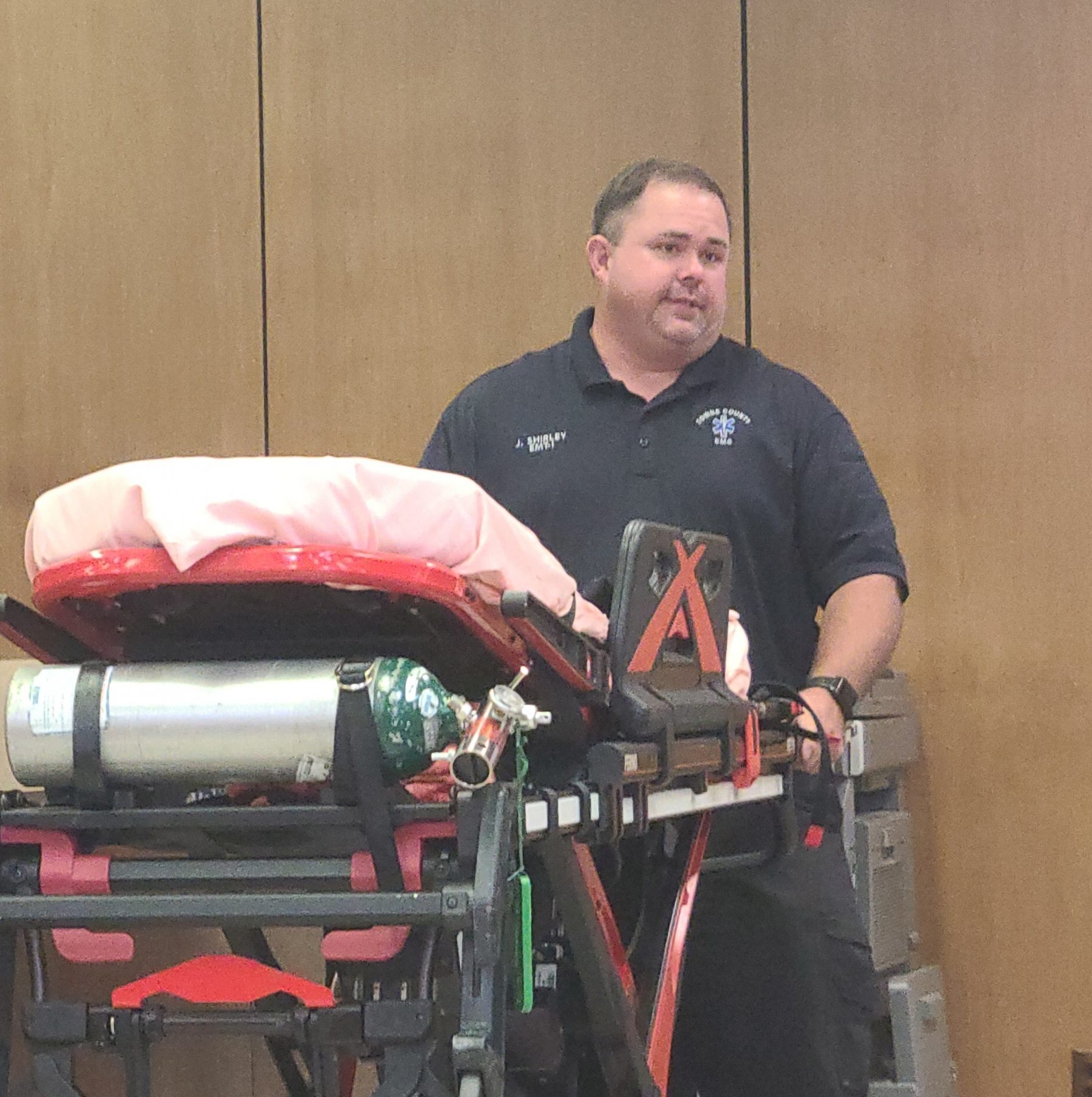 Demonstration of the Ferno stretcher

A stretcher can lift 1,500 lbs. and one person can operate it. If the EMS crew is working along a road or at night, the unit comes equipped with lights to alert those passing through the area. The arms make it easier to render assistance such as starting an IV.

Towns County agreed to pay $11,844 for its share of services for the UGA Extension Office. Legacy Link was paid $12,450 for its services to help the senior community in Towns.

Sole Commissioner Cliff Bradshaw also signed the contract with Towns County Schools for SRO officers for the upcoming school year. The county pays 25 percent of the officers’ salary, and the school covers 75 percent.

The county amended the 2020 budget. It added $30,450 in revenues from the sale of surplus equipment from the sheriff’s department. The office collected older vehicles and sold them for extra revenue.

$83,989 was added to the sheriff’s capital expenditures and $53,500 was taken from the public safety detainee crew. The detainees weren’t available for work for most of the year because of COVID-19; this resulted in savings for the county.

The $53,500 was moved to the sheriff’s office for capital expenditures.

“The sheriff’s department needed some new vehicles. The old vehicles cost a lot of money in repairs. By not having detainees, they gave us a little extra money so we can help bring them up to date on their vehicles which in the long run will save money. He’s working on a program to change the cars out, not run them into dirt to where they’re worth nothing so we can continue to have good vehicles on the road,” Bradshaw explained.

He added that financially the county is in good shape and Towns is experiencing a very busy summer.

The Pickleball courts are being resurfaced and they are looking at replacing the player’s surface at Foster Park. It will probably be a multipurpose floor like at the old rec gym. The current floor is out of warranty. More details will be available at the next meeting.

Hiawassee and Towns County also entered into an agreement for the county to run the city’s election in November.

HIAWASSEE, Ga. – As previously reported, the Towns County Courthouse, constructed in 1964, could be getting a much-needed facelift should the SPLOST referendum pass on the May 19 ballot. Towns County Sole Commissioner Cliff Bradshaw is consulting with the architectural firm  Clark Patterson Lee who was hired to sketch the blueprints for the modernized design. The renovation cost, derived solely from SPLOST funds, is expected to amount to approximately $8 million. Because the Towns County Board of Education ESPLOST is set to expire this year, implementing a county SPLOST will not increase the current 7-percent sales tax.

Click to read: SPLOST to appear on spring ballot 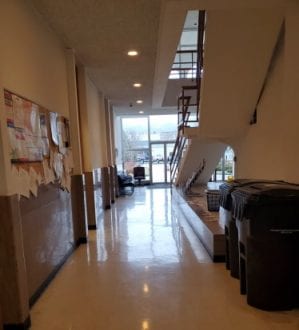 The lower level of the aged Towns County Courthouse.

Preliminary ideas include transforming the present courtroom into additional office space while constructing a new full-sized and a smaller courtroom. “A lot of times we have court here and have to have court across the street at the civic center,” Bradshaw explained. “We’re also talking about doing a sally port because the grade of the property back here goes downhill and it’s a great place to do a basement type.” The commissioner added that holding cells for prisoners awaiting court will be installed.

“There’s many things that they’re looking at doing to make the courthouse more efficient, as far as energy-efficient goes, and safety to make it safer,” Bradshaw said. “We’ve got these (courtroom) side doors, here and here, that back in the day were fine to use. People come and go as they want but those days, unfortunately, they are gone.”

Handicap-assessable restrooms, as well as a family restroom, is also in the plans. 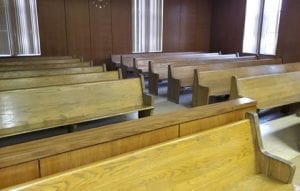 “The $8 million is what we’re looking to spend on the additions and renovation of the courthouse. They think they can do all of our needs for that plus additional parking,” Bradshaw said. The blueprints are expected to be completed in approximately five weeks, and a minimum of two County Hall meetings will be held with different renovation options. “Everything we do, we’re going to involve the public in it,” Bradshaw assured.