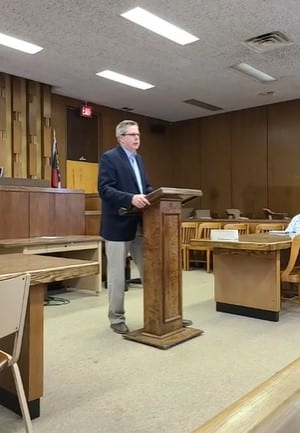 Towns County received just over $1 million in American Rescue Plan funds last month and Bradshaw’s still deciphering how exactly the money can be used. On Wednesday, the county attorney will be in the courthouse helping to determine where the funds can be spent.

Since the initial approval of the American Rescue Plan earlier in 2021, the strings attached and approved areas for spending has continued to change. Previously, the Democrat-led plan stipulated states that accepted funding couldn’t cut taxes. This provision has since been removed after protests from Republican states.

“We want to make sure that we’re very clear on how the money is to be used. Anytime you get money from the federal government there’s not many strings attached to it, is there?” Bradshaw joked for a second.

He’s spoken with Union County Commissioner Lamar Paris and both are dedicated to understanding the ins and outs of these federal funds.

“My main concern with the money is doing what we can for our county employees first and then see how we can use the money as we go forward. Our county employees worked all through the pandemic. We didn’t have people quit. We didn’t have people leave. They showed up. They went to work. Several people caught COVID, were very sick, and were out several weeks, but back to work they come. When a lot of other places were shut down, the county government can’t shut down,” Bradshaw explained. “I’m very proud of all public safety, all county employees for sticking with us, doing there job, not whining and crying, doing the extra work they needed to do.”

However, the areas for spending are still changing. Water, sewer, and broadband access appear to be the services consistently approved for spending. Public health was on one version but later was removed.

More information about Towns County’s plans for the funds will be available once they thoroughly review all the information.

Bradshaw commended Towns County Fire Department for their efforts in public safety and spoke about the department recently receiving a $1,000 donation from homeowners whose house caught fire seven years ago.

A camera surveillance system for Bell Mountain was approved for $2,500 and a $75 per month maintenance fee.

The road into Tate City is being regraded and repaired for public safety needs. The county rented a bulldozer and the road department will take charge of the project. They plan to check on it every few months.

“Once we get the road done, I’m going to call the [Sheriff], and on the weekends, he’s going to have special people who do that zone go up Hightower and wait on the jeepers to come out and have a friendly talk with them,” Bradshaw stated.

The Georgia Indigent Defense Services Agreement for those who need public defenders was renewed. Towns County pays the state for these services along with the other counties in the Enotah Judicial District. Towns pays 12 percent of a $409,105.44 annual contract.