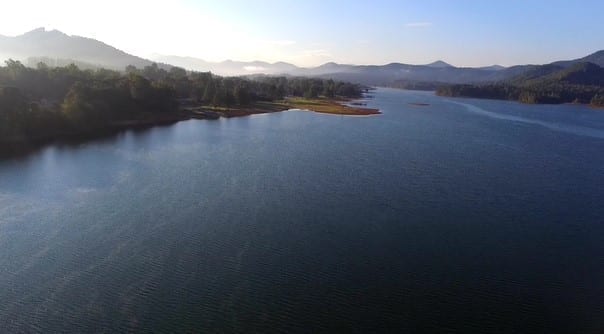 HIAWASSEE, Ga – Hiawassee City Council approved $239,274 to fix the water intake process after one of the floatation devices broke.

The city of Hiawassee uses Lake Chatuge as its water source and processes it through the Rowe Canupp treatment plant. The floatation devices used to aid in the intake of lake water have broken. The city needed to rent a barge to restore the intake properly. The entire repair process will cost the city $239,274. $229,500 will go to the barge and crane rentals as well as lifting the intake out of the water. The equipment and replacement cost is $3,800 and $5,900.

“What they have to do is bring in a barge big enough to put a crane on to, then left up the whole intake 12 feet and replace and fix the bottom of it,” Mayor Liz Ordiales explained.

The water intake is supposed to sit 12 inches above the water, but right now, it’s just 6 inches.

“Unfortunately, we tried looking around. We’ve been working on this for a month,” added Ordiales. “We can’t find anybody who does this type of work.”

The city even investigated airbags to lift the intake out of the water, but it would provide enough height for the restoration process.

The only reason the city could secure the repairs was because of a similar structure under construction in Gainesville. The company can move the equipment up to Hiawassee and fix the intake. However, transportation of the barge requires for it to be disassembled and reassembled upon arrival in Hiawassee.

The current water intake has two styrofoam floatation devices sitting on top of each other. Those styrofoam devices separated, and the bottom piece broke.

“They should have never put two of those things together, number one, and that is like a boat dock. Well, it’s a water intake. It’s got all these hoists and pumps and all that kind of stuff,” said Ordiales. 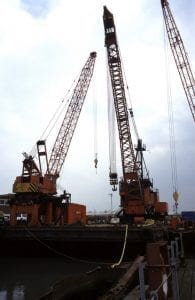 The crane and barge could look similar to this example, but smaller.

The mayor conceded it’s a lot of money for repairs, but the city’s operating funds can handle the expense.

“We’re okay,” confirmed Ordiales, “Of course, it will make a gigantic debt, but that’s okay.”

Since Ordiales received the total cost of the project just before the city council meeting, she will work to bring the price down if possible.

The council also extended the sewer moratorium for another three months.

Ordiales selected Alan Fickle to serve on the city of Hiawassee’s Ethics board as a replacement for Susan Phillips. 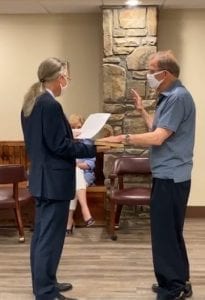 Alan Fickle taking the oath of office for the city board of ethics.

Fickle moved to South Georgia with his wife in the 70s from Indiana before retiring in Hiawassee.

“My wife took note of this beautiful location… and said this is where [she] wanted to retire, and thankfully we did,” Fickle added.

A member of Christ the King Church, Fickle is active in religious activities. He previously was involved with the National Day of Prayer.

“We’re really happy and really fortunate to have Mr. Fickle. He’s a really nice guy. He comes to all of our meetings. We’re sorry to see Susan go, but she wanted to be closer to her family,” said Ordiales.

Susan Phillips moved to Pennsylvania with her husband.

Posted by City Of Hiawassee on Tuesday, August 4, 2020