Approximately 1 in 698 Towns residents has had a confirmed case of the virus. As of July 21, 84 total cases were reported out of a population of 12,034 with one death and 13 total hospitalizations. The hospitalization number reflected overall cases since March, not the number of current active cases in Chatuge Regional Hospital.

Only three percent of confirmed cases experience severe symptoms, according to the CDC.

“The CDC says it does not act like any known virus,” said Ide.

Over 1,000 COVID-19 nasal swab tests were administered by the TCHD, but some of these were retests from people returned for another exam. As one of six testing sites in Public Health District Two, TCHD often receives patients from neighboring counties and states. The facility conducts drive-up COVID-19 exams once a week on Fridays from 8:30 a.m. to 1 p.m. 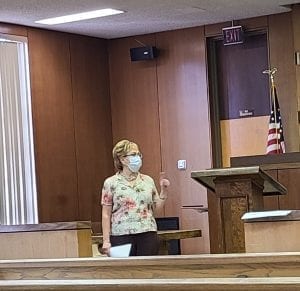 Ide assessed it’s been crazy times at the TCHD during her COVID-19 update.

Nasal swab only tests from active COVID-19 cases; it’s not an antibody test. If a person has the virus at the time of the swab test, it will result in a positive.

Currently, it takes between seven to ten days for results to come back. Those interested in getting tested are encouraged to call their local health department to set up an appointment time. However, Laura stated that people who just show up will be worked into the schedule.

An epidemiologist in Union County performs contact tracing for TCHD. Previously, the epidemiologist in Gainesville tried to cover the entire Public Health District Two, but it proved impossible to accurately monitor 13 counties. Now, several epidemiologists assist in the process.

Recovery numbers aren’t available in the state of Georgia at this time. 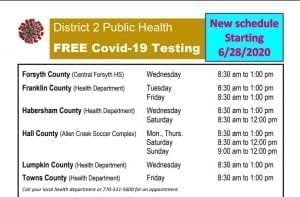