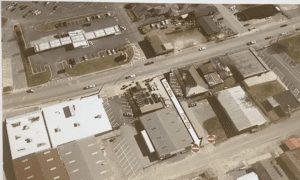 The City of Hiawassee applied for Ga. DOT permit to make this unnamed road a one-way street.

Hiawassee’s city county approved a $3.36 million budget at Monday’s called session, prior to their work session. They also heard an update from the mayor about the water billing process, which will resume normal operations in July, fluoride resolutions, and discussion about signage at parking lots.

Mayor Liz Ordiales said that normal water billing will start back in July, with bills due on July 20. This comes after a four month moratorium on disconnecting water on overdue bills.

She encourages the city’s 2,367 water customers to use the ACH automatic pay system.

“It’s safe, no one has to handle anything and it’s all done electronically,” she said. The city currently has 466 customers using the system.