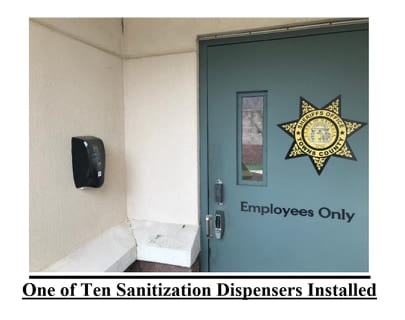 The following are the major amended changes to the
Sheriff’s Office daily operation plans:

Inmate Visitation: All inmate visitations has been
canceled until further notice.
Religious Services: All services within the jail involving
contact with outside subjects are canceled until further
notice. Inmates will continue to be able to obtain religious
materials within the jail.
Jail Sanitation: All inmate areas normally cleaned twice
daily will be cleaned three times daily.
General Facility Sanitation: All general areas of the jail
and Sheriff’s Office will be kept in a high state of
environmental cleanliness.
Applicant Fingerprints: All applicant fingerprints are
suspended until further notice.
Access to ATM Machines: Access to the ATM machine
in the Jail has been restricted. Family and friends can still
deposit money into an inmate’s commissary and phone
accounts by using the means shown below:

To Purchase Inmate Phone Time
1. Inmate phone time can be purchased by visiting
www.inmatesales.com or by calling 1-877-998-5678.
2. We also have an inmate Phone ATM in the Bonding
Window area outside the facility that accepts cash,
debit cards, and credit cards.

To Deposit Money Into An Inmate’s Commissary Fund

1. Deposits may be made into an inmate’s commissary
fund by visiting
https://deposits.jailatm.com/WebDeposits/.
2. Deposits may also be made by calling 1-877-810-0914
and following the prompts.

Informational Updates: Staff transmitting and receiving
informational updates and recommendations in reference to
the Covid19 Virus will be using webinars, phone
conferences, and email avenues to exchange information to
reduce physical contact to reduce the spread of the virus.
On-Line Audio/Visual Meeting: The Sheriff’s Office has
just recently implemented a program to host meetings with
County department heads, and other agencies, on-line
through the internet to discuss public safety issues and
other concerns as necessary therefore limiting physical
contact as means of preventing and reducing possible
exposure to the virus.
Six (6) Foot Buffer: All staff members have been
instructed to try to maintain a 6-foot buffer zone between
themselves and others they encounter while performing
their duties.
Personal Hygiene: Staff has been instructed to use proper
hygiene practices, washing hands after any contact with
another person.

Calls for Service: Uniform Patrol will handle any non-
emergency calls for service by phone as situations dictate,
i.e. general questions of an officer by the public. All
emergency calls for service will be responded to
immediately.
Medical Attention: Any inmate or staff member who
experiences symptoms related to the Covid19 virus will be
given immediate medical attention.
The Sheriff’s Office will be taking any and all precautions
to reduce the risk of spreading the virus to inmates and staff
as well.
The spread of the Covid19 Virus across the United States
as well as other Countries is new ground that first
responders have not experienced before. We will be acting
according to recommendations that will be coming down
and updated daily.