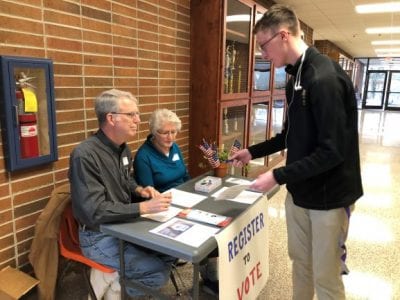 “Students who are age 17 ½ may register for the 2020 election cycle,” Vickie Plunkett explained. “Voters in Georgia do not register by Party but will declare their Party affiliation during Georgia’s presidential preference primary on March 24.”

According to the U.S. Census, voting rates have historically varied according to age, with older Americans generally voting at higher rates than younger Americans. In 2016, this was once again the case, as citizens, 65 years and older, reported higher turnout (70.9 percent) than 45- to 64-year-olds (66.6 percent), 30- to 44-year-olds (58.7 percent) and 18- to 29-year-olds (46.1 percent). However, in 2016, young voters ages 18 to 29 were the only age group to report increased turnout compared to 2012, with a reported turnout increase of 1.1 percent. All older age groups either reported small yet statistically significant turnout decreases (45- to 64-year-olds and those age 65 and older) or turnout rates not statistically different from 2012 (30- to 44-year-olds).

In any given presidential election, the number of reported voters typically increases relative to the previous presidential election, largely as a product of increases in the size of the citizen voting-age population. Data shows changes in both the number of reported voters and the citizen voting-age population between 2012 and 2016. Overall, in 2016, there were about 4.6 million more reported voters than in 2012. A majority of these additional voters (3.7 million) were 65 years and older. However, despite these additionally reported voters, the overall voting rate was not statistically different between the two elections.

Towns County Democrats will hold their next monthly meeting on Thursday, Feb. 13, at the Towns County Civic Center in Hiawassee, Plunkett said.  A pot-luck meal begins at 6 p.m. and the meeting starts at 6:30 p.m. Meetings are open to the public.