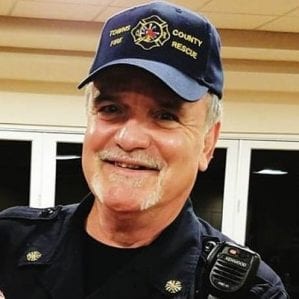 HIAWASSEE, Ga. – Towns County Fire Chief-Coroner Harold Copeland announced on the evening of Jan. 6 that he would seek a second term as county coroner.

“It is with much humility and my deepest respect for the citizens of Towns County, that I humbly ask for your support once again, for the Office of Coroner,” Copeland stated. “I have served on the fire department for 35 years, in many different positions, and five years as fire chief. I also work part-time with the Young Harris College Police Department. I was elected to the coroner’s office in 2016, and I am asking for your support this May, as I run on the Republican ticket once again.”

At the time of publication, no other contenders have publicly challenged Copeland in the 2020 race.

A coroner is a government official who is empowered to conduct or order an inquest into the manner or cause of death and investigate or confirm the identity of an unknown person who has been found dead within the coroner’s jurisdiction.

In the state of Georgia, a coroner must be at least 25 years old, registered to vote, and in possession of a high school diploma. Medical experience is not required. In 1777, Georgia was the first state to mention the Office of Coroner in its constitution. Georgia is among 27 states that continue to elect local death investigators. Four of the other 26 states require coroners to be physicians, and one state requires that coroners must be licensed medical professionals.

FetchYourNews.com attracts over 300,000 page views and 3.5 million impressions per month with a 60,000 Facebook page reach, and approximately 15,000 viewers per week visit FYNTV.com