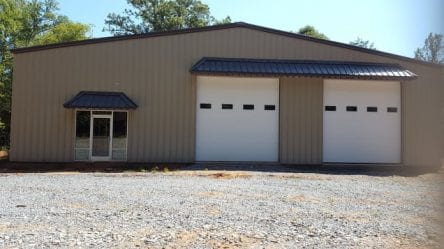 YOUNG HARRIS, Ga. – Towns County Commissioner Cliff Bradshaw announced the near-completion of the Young Harris fire station, a project that has been in the works for many months. Bradshaw expects the facility to be operational by November. According to the commissioner, the station will feature an additional landing pad for medical helicopters to transport critical patients for trauma care. Towns County currently has four designated landing sites for air transports, strategically located throughout the area.

“We’re very excited about it,” Bradshaw told FYN last week. “The new station’s location will also help the fire department’s ISO rating and homeowners’ insurance rates.” An ISO insurance rating, also referred to as a fire score or Public Protection Classification, is a score from 1 to 10 that indicates how well-protected a community is by the local fire department.

Commisioner Bradshaw announced in late December that $130,000 derived from the 2018 Special-Purpose Local-Option Sales Tax (SPLOST) fund would be applied to the construction of the Young Harris fire station. Detainee labor, which did not cost the taxpayers, contributed to a large portion of the labor involved

The project was originally expected to be completed this summer. It was temporarily delayed, however, due to sight plan issues that the Department of Transportation had with road entry placement. Additionally, wet, winter weather was responsible for an inability to properly grade the land.