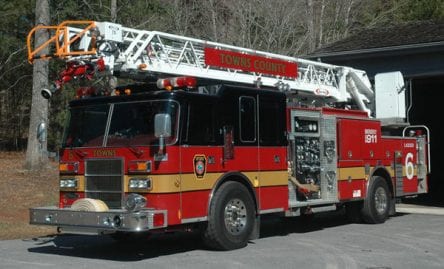 YOUNG HARRIS, Ga. – Towns County Sole Commisioner Cliff Bradshaw announced this week that $130,000 derived from the 2018 Special-Purpose Local-Option Sales Tax (SPLOST) fund will be applied to the construction of a fire station for Towns County Fire and Rescue in Young Harris. The commissioner said that the project is expected to begin this spring, with completion possible by mid-summer, 2019.

The fire station will be built on state Route 66, approximately 1.25 miles from U.S. Highway 76. The current station is located in the former Electric Membership Corporation (EMC) building, a few blocks west of Young Harris College.

Bradshaw told FetchYourNews that the project was temporarily delayed due to sight plan issues that the Department of Transportation (DOT) had with the road entrance placement. Additionally, wet, winter weather is responsible for the inability to properly grate the land.

“We’re also taking our time with it so that we stay in budget,” the commissioner confirmed.

The “left over” $130,000 SPLOST is expected to cover the cost of the foundation slab and the shell of the building. True to form, Bradshaw plans to incorporate inmate labor into the project as much as possible in order to conserve the county taxpayers’ dollars.

“We will use detainee labor to go in and frame the walls for the bathroom, the front office, and then we are going to have like a day-room,” Bradshaw said in May, 2018, when the project was announced, “We are going to build the building with the future in mind that if we ever had a full-time fire department that there would be a shower there with a bathroom, and then a room with a bed, and stuff like that. It’s a lot cheaper to try and do it now than add on later.”

Six fire stations are strategically located within Towns County, with Station 1 in Hiawassee and Station 2 in Young Harris manned Monday through Friday during county business hours. Dedicated volunteer firefighters respond to “after hour” emergencies as they arise.