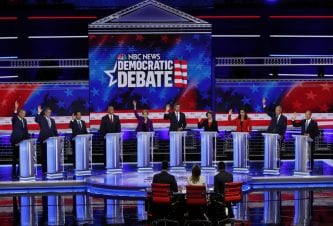 “For two days last week (for those who bothered to watch the debates), Americans were subjected to a spectacle never before witnessed on the shores of this country. Twenty men and women, claiming to be Americans and wanting to be President of the United States of America, attacked and ripped to shreds every idea and value that makes this nation great. Their only aim was to destroy the very economic fabric upon which we live and breath and enjoy our being. They want to turn the country upside-down.

“The world considers Iran to be a dangerous state. Around the globe terrorists have the “dangerous” label pinned to them. That’s the world stage. Here in America, those who shared the Fox Theater stage in Detroit are the twenty most dangerous people in the United States of America today. Their purpose is to set this nation as we know it on an iceberg and send it floating out to sea into oblivion.

“They are evil because the philosophy they espouse is evil. The dictionary defines evil as profoundly immoral and wicked. That’s tame for this bunch. Some define evil as anything that separates us from our very self, our soul. That’s more like it. Being separated from the soul means humanity is lacking. Those twenty displayed nothing resembling humanity. Finally, others say evil is and always was the absence of love. That settles the matter, the hate spewing from all of them personified evil. Love was missing on that stage both evenings except for Williamson who proclaimed love in a new age fashion.

“The word evil comes from the Old English “yfel”, the German “ubel” and the Dutch “euvel” all three of them deriving from an even earlier “wap”, meaning “exceeding proper boundaries”. Most debate watchers most likely noted the absence of any boundaries. An economy without proper boundaries is called Socialism.

“Socialism is a utopian hallucination focusing on a “just society”. Capitalism is unjust we learned from the debates. It’s the government’s responsibility to provide its citizens with all their needs. We must free them from the capitalist vices of greed and inequality. Everything for our citizens must be free. To get the ball rolling down the precipice of socialism, we will begin by giving every citizen of the United States $1000 a month.

“Most fairy tales begin with “Once upon a time”. Once upon a time, the Soviet Union, Cuba, China, Yugoslavia, Vietnam, Tanzania, Nicaragua and Venezuela attempted to construct a socialist society. Not once, but each time, these experiments were colossal failures. They were social, economic and political disasters. Their worker-run socialist paradises came crashing down. Not once upon a time, but every time, the fairy tale of socialism had an evil ending.

“The evil ending of this philosophy left each country in economic chaos, plunging its citizens into rioting, mayhem, rampant crime, hunger, disease and death. How “just” was that to its citizenry? Witness Venezuela today. Witness the difference between North and South Korea. Witness East and West German regimes before unification. At the time of unification, West Germany’s GDP was more than twice that of East Germany. The movement of bodies was always away from these repressive regimes. Notice Americans have never risked their lives on a makeshift raft to escape to Cuba. Notice the Berlin wall wasn’t built to keep West German’s from escaping to East Germany.
History shouts out with a cacophony of warning…every attempt to establish a socialist economy has ended in tragedy. Every one!!!

“Each time a socialist regime crashed the past century, historians would proclaim the death of Socialism or the end of history. Capitalism and western democracy prevailed, they exclaimed, adding Socialism had been relegated to the dust bin of history. But is hasn’t!! Socialism is a failed idea that never dies. Why does it have such lasting appeal? Why does its focus on a “just society” trump capitalist values of self-interest and self-reliance? What’s with the 20 for 2020? With the certainty of failure staring them in the eyes, why can’t they face the reality of the situation? The answer is, the mind of a Socialist can never be changed through rational argument. It never has happened and never will. Socialists aren’t rational, they view everything through the lens of their emotions.

“An ominous explanation could be their minds are so inundated with hate for President Trump they are blinded to the evil they are propagating. Love was absent on the stage those two evenings. Hate dominated…in their eyes, in their rantings, in their voices, in their hand and body language. The title of this Musings is “the definition of evil. It’s plain and simple, it cannot be argued, it cannot be debated…the definition of evil is Socialism. If Americans aren’t trembling in their boots after watching the Fox Theatre debacle, our country is in a heap of danger that threatens the very foundations of our society.”