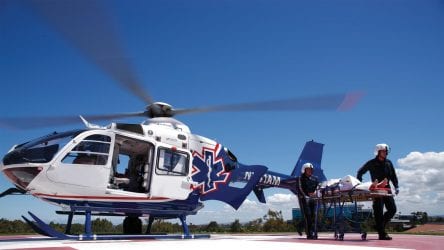 HIAWASSEE, Ga. – Towns County Commissioner Cliff Bradshaw recently announced insurance coverage renewal with emergency medical flight service, Air Methods, stating that Towns County citizens will be covered by the program, free of charge, for yet another year. The insurance program costs the county $14,000 annually, and the commissioner stated that while citizens will receive the same service at the same cost as in the past, a financial cap limit was placed on transports. “It doesn’t matter how many people are flown out, the cost remains the same,” Bradshaw told FYN. “However, the county will pay $700 per flight, and for example, if only five people are flown out this year, it would amount to only $3,500.”

“On average, a medical helicopter flight in this area costs in the range of $30,000 to $50,000. Residents of Union and Towns Counties will not have any out-of-pocket expenses for them to use an Air Methods Medical Helicopter in an emergency situation.  Any resident of Union or Towns Counties that use the Air Methods helicopter will receive a bill in the mail; however, the membership will take care of what the insurance does not cover. If someone does not have insurance this program will pay all of the costs. Proof of residency will be required to be sent in with the bill.”