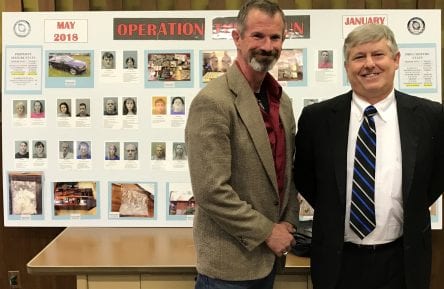 HIAWASSEE, Ga. – FYN reported of a mistrial occurring in Towns County last week, the result of a Towns County Sheriff’s Office poster displaying photographs of arrested subjects, scheduled to face drug-related charges in court. The poster, shown in the feature image with Towns County Sheriff Chris Clinton (left) and Enotah Circuit District Attorney Jeff Langley, was situated in the entry area of the Towns County Courthouse. FYN spoke with a courthouse official who confirmed that the mistrial was pronounced by Superior Court Judge Raymond George, based on his ruling that the defendant may not receive a fair trial due to the placement of the arrest poster. Jurors were reported as recognizing the defendant, who was charged with possession of methamphetamine, upon entry into the courtroom.
FYN recently received a response from District Attorney Jeff Lagley:
“The case was the State vs. Marry Nicholson 2018-CR- 213, in which she is charged with possession of methamphetamine and possession of a drug related object,” District Attorney Langley told FYN. “Jury selection had begun on Tuesday May 21st.  The case was assigned to James Blundell in my office for prosecution and I was observing. During a break it came to my attention that a poster was up at the courthouse depicting photos of defendants that had been arrested in the recent effort to combat drug use in the county. It was located on the other side of the stairwell from the DA’s office and therefore neither myself nor my staff noticed it until after jury selection had begun. Upon being notified of it, I immediately had it removed out of site and then did the proper ethical response by informing the Judge of its existence.  While viewing such a poster would not necessarily disqualify a juror, it would require each individual juror be questioned about its affect and could have created a challenge on appeal. The judge took an appropriately cautious approach and called off the trial of the this case with that group of jurors.”
Langley said the case in question has not been dismissed, and will simply be rescheduled for a different jury at a later date.
According to Towns County’s website, the Enotah District Attorney’s Office is a subdivision of the State of Georgia tasked with the prosecution of state crimes within a four-county circuit in Northeast Georgia, including Towns, Union, White and Lumpkin Counties. Nearly 2,000 criminal cases are referred to the District Attorney’s office for prosecution each year by more than 20 law enforcement agencies, including but not limited to, the four county sheriff’s departments, the city police of Hiawassee, Blairsville, Helen and Cleveland,  Georgia State Patrol, Department of Natural Resources, and the GBI. To facilitate the prosecution of these cases, the District Attorney’s Office attends and advises the meetings of the Grand Jury in each county, advises and assists law enforcement in the investigation and preparation of cases, and provides regular training to members of law enforcement.  The office prepares accusations and indictments, making decisions about how each case is charged and provides the defense with information on each matter as required by law.