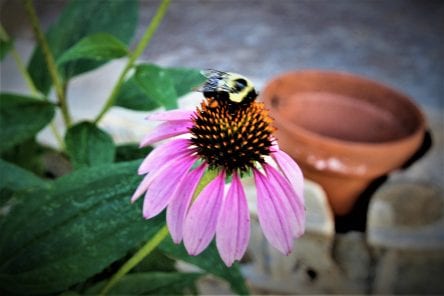 HIAWASSEE, Ga. – Honeybees are essential for humanity’s well-being, serving as the world’s most important pollinator of food crops. It is estimated that one third of the food that we consume each day relies on pollination. Honey is a natural product made from bees, and honeybees visit millions of blossoms in their lifetimes, making pollination of plants possible, while collecting nectar to bring back to the hive. Fortunately for sweet-lovers, bees produce more honey than their colony requires, and beekeepers remove the excess for consumption.

Honey has an indefinite shelf life. The properties of processed honey keep it from becoming a hotbed of microbes and other contaminates that causes edibles to spoil. As long as the properties aren’t altered, processed honey has a never-ending shelf life. Both honeybees and bumble bees gather pollen and produce honey. However, because bumble bee colonies have shorter lifespans and smaller populations, they don’t produce as much honey. Both types will sting in defense of their nests.

“Domestication of bees is shown in Egyptian art from around 4,500 years ago,” RC&D Executive Director Frank Riley explained. “Simple hives and smoke were used and honey was stored in jars, some of which were found in the tombs of pharaohs such as Tutankhamun. It wasn’t until the 18th century that European understanding of the colonies and biology of bees allowed the construction of the moveable comb hive so that honey could be harvested without destroying the entire colony.”

Many domestic and imported fruits and vegetables require pollination. Examples include avocados, soybeans, asparagus, broccoli, celery, squash, sunflowers for oil, cucumbers, citrus fruit, peaches, kiwis, cherries, cranberries and melons. Honeybees play a critical role in pollination of commercial crops, and approximately 80% of US crops are said to be dependent on honeybees. Honeybees pollinate clover and alfalfa, which are fed to cattle, therefore implications exist for the meat and dairy industry as well. A vast range of manufactured food products are also derived from the ingredients.

Bee-friendly gardens can help the insects to thrive. HoneybeeConservacy.org offers the following tips:

“Bees are our little friends and without them a lot of us would go hungry, so don’t swat the bee on your picnic table,” Riley appealed. “Just be glad that they are on the job working hard to keep food on our tables.”