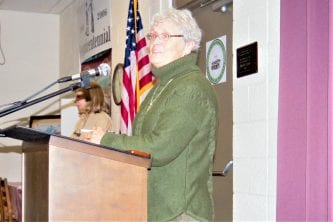 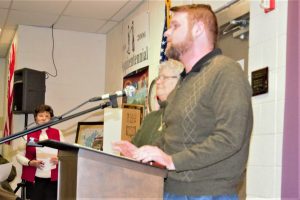 Brief, sole-sided conflict ensued preceding the paper-ballot vote as presidential candidate Terry Lynne Marshall adamantly refused to speak with President Sandra Green situated beside the podium. Marshall recited a lengthy resume of qualifications, stating, “I really don’t want to be president, but I feel the need to be now for this group.” Marshall served as the historical society’s president from 2003 until 2012, relinquishing the post to care for her aging parents.

Marshall relayed that her paramount concern involves proper, permanent preservation of “Wisdom of our Elders,” a historical timeline of recorded interviews. Marshall voiced dissatisfaction with the current handling of the records, and strives to forge a group of volunteers dedicated to the project.

Prior to the casting of ballots, Green, a key player in the restoration of the Old Rock Jail museum, humbly stated a passion for history as her cardinal qualification, explaining that the Towns County Historical Society is the only organization to which she is devoted, adding, “I am very proud of what I have done.” Green remained composed throughout the meeting.

FYN spoke with Green after the election to inquire whether the matter regarding the recorded interviews will be addressed. Green stated that discussion will take place at the society’s upcoming executive meeting, with the item potentially placed on February’s agenda.

“Congratulations to Jerry Taylor on being elected as vice president of the Historical Society this evening,” Green later wrote on social media, “Also to Tyler Osborn who was elected as secretary. I look forward to working with them as well as Frances Shook and Mary Ann Miller, who were re-elected as treasurer and membership secretary. 2019 should be an exciting year for us. I look forward to working with them to make the organization better than ever! Hope you’ll make our 2nd Monday of each month meetings a regular part of your schedule! Thanks for your support.”