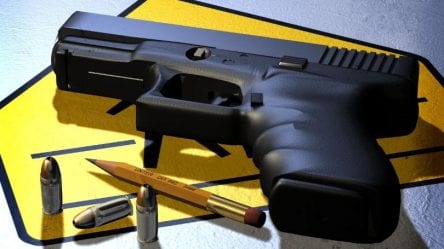 HIAWASSEE, Ga. – The sudden sound of automatic gunfire rang out in the courtroom of the Towns County Courthouse on Thursday, Dec. 18, a simulated start to a powerful, passionate speech on school shootings, delivered by Eastgate Life Academy student Hannah Minchew.

Minchew plans to address state leaders in Atlanta early next year in an effort to shine a spotlight on a significant subject, one which is clearly close to her heart.

“Did you not here that? Why are you still all sitting here? Do you even know what that was? That was the sound of an assault rifle,” the seventh grader began with conviction, referencing the Columbine shooting, “That was the sound heard by those students on April 20, 1999, when Dylan Klebold and Eric Harris started one of the worst school massacres in history. They killed 13 people, and wounded 24 others before turning the guns on themselves and committing suicide. 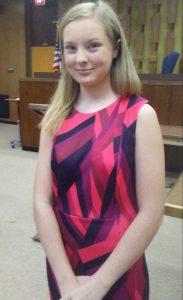 “Did you know that there has been 494 school shootings? 494, and 18 of those have occured in Georgia, and in most every case of a school shooting, the signs were there. These attackers had planned their attacks for weeks to months, but no one noticed,” Minchew continued, leading the 12-year-old to recap the warning signs present prior to the Sandy Hook tragedy.

“But are our schools really safe? Do barriers, locked doors, and armed guards really make us safe? Does the banning of assault rifles really make us safe? These are all hard questions with no easy answers. I believe that it takes all of this and much more. It takes everyone in our community being vigilant and aware,” Minchew pleaded, concluding with a heartfelt, “Will you notice?”

“We have worked, as commissioner, we have worked with Sheriff Clinton, and your school Superintendent Darren Berrong,” Commissioner Bradshaw said, “We’ve had several meetings on school safety, on what we can do to try to make our school safer, and that’s why we put on the other DARE officer, hoping that it would make a difference. Our school campus is so spread out.”

FYN has extensively reported on school security in our counties of coverage, and we will continue to pursue future developments.