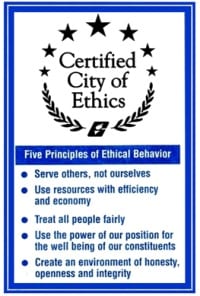 Three Hiawassee residents will be selected to volunteer as ethics board members – The first appointed by Mayor Liz Ordiales, a second chosen by Hiawassee City Council, and the third in agreed conjunction of both mayor and council.

The ethics ordinance itself states that elected and appointed city officials must abide by high ethical standards of conduct, with a requirement of disclosure of private financial or other conflicting interest matters. The mandate serves as a basis for disciplinary action for violations.

Listed among expectations are selfless servitude toward others, responsible use of public resources, fair treatment of all persons, proper application of power for the well-being of constituents, and maintenance of an environment which encourages honesty, openness, and integrity.

Public reprimand or a request for resignation may be issued. An appeal may be filed for judicial review with Towns County Superior Court within 30 days after the ruling by the Board of Ethics.

The decision to list the item on the agenda followed community concerns that the previous appointment of ethics committee members were invalid due to the council not having a choice as to whom served.