HIAWASSEE, Ga. – Towns County Sheriff Chris Clinton officially endorsed Republican Gubernatorial candidate Brian Kemp, stating that it is, “imperative that we protect our state from the insane radicals who would fundamentally change our state, our nation, and even our beloved county…”

“In my brief 50 years, I have not witnessed a time when America was so polarized,” Sheriff Clinton explained, “We live in a time when the mainstream media is actively and openly lying to viewers. We find ourselves living in a day when public officials appear to be encouraging insurrection, perhaps even treason. The left is no longer interested in civil discourse. Evelyn Beatrice Hall’s famous statement, ‘I disapprove of what you say, but I defend to the death your right to say it’ is no longer spoken of in the halls of higher learning. Rather, the left has resorted to the use of paid mobs to bully and intimidate conservatives. Most of us were taught to believe in absolute truth. We are now told we should sit down and shut up as the so-called ‘narrative’ of the left trumps any and all fact. ‘Guilty until proven innocent’ appears to be the new motto of the left.” 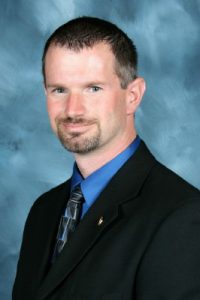 “Most of us were taught right from wrong, taught to fear God, to respect others, to tell the truth, and many of us were advised that if you can’t say anything nice, don’t say anything at all,” Clinton continued, “We were taught to love our country.  In school we learned how our nation’s founders risked their reputations, fortunes, lives, and the lives of their sons to purchase with blood the freedom guaranteed by the Constitution of these United States of America.   These wonderful human beings we call police officers, who place their lives on the line each shift, leaving their own precious families at home to go out and protect others, were the good guys.  We taught our children to trust them and reach out to them if they needed help.  Now children are being taught to fear the police.  Who will they turn to for help?”

“These values represent the Georgia and America that I love and believe in,” the sheriff expressed,  “This is the state and nation in which I grew up and want to raise my children in.  Our home and heritage are currently under siege by the left.  My friend Brian Kemp shares our belief in the greatness of Georgia and America. His opponent, a socialist, wants to erase the Georgia we know and love.  Whereas Brian Kemp has been a friend to Georgia law enforcement, a friend to Towns County and a friend to all Georgians, his opponent is currently suing Georgia in an apparent attempt to find some liberal judge who will allow illegals and non-Georgia citizens to vote in our elections.

“Many Georgians may not know that Barack Hussein Obama’s Department of Homeland Security attempted to hack into our state elections database during the 2016 elections.  Brian Kemp, our Secretary of State, not only stopped them, but under his leadership, the malicious attacks were traced  back to the DHS.  All we heard on the news were red herring reports of ‘Russian collusion.’ The appointed leftist leaders of the formerly revered FBI, were not only leaking information to the press, but were apparently intentionally deceiving federal judges, and the America people with a phony, paid for, deception.  The very same folks were simultaneously clearing Hillary Clinton of any wrong-doing prior to even an interview.  Think about that: the FBI being used as a political weapon.  That is the vision the left has for Georgia and America.”

“These are just some of the reasons it is imperative that we elect Brian Kemp our Governor of Georgia.  I have known Brian personally for many years,” Sheriff Clinton stated, “I consider Brian Kemp a friend and can attest to his deeply held conservative beliefs and values.   More importantly, Brian Kemp is an unflinching leader who is unafraid to speak the truth in the face of a malicious press.  I would be honored to call my friend Brian Kemp my governor.  Brian Kemp is a proven leader we can count on. His opponent presents what I consider a clear and present danger to our very way of life.”

Clinton encouraged voters to elect a team that will support a Brian Kemp administration.

“We cannot allow the insane behavior that has been occurring in Washington, D.C. to infect the State of Georgia,” Clinton concluded,  “I cannot state this strongly enough: to protect Georgia as we know it, we must elect Brian Kemp our Governor, Chris Carr for Attorney General, Geoff Duncan for Lieutenant Governor, and Brad Raffensburger for Secretary of State.  It is imperative that we protect our state from the insane radicals who would fundamentally change our state, our nation, and even our beloved county into a place I wouldn’t want to live, much less raise my children in.  Please stand with me and let us finish this drill by electing conservative, God-fearing, Republican candidates who will protect Georgia.”