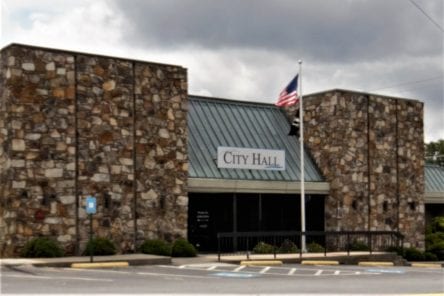 HIAWASSEE, Ga. – Despite higher property assessments, Hiawassee seems to be on track to reject a 2018 rollback millage of 2.170, in favor of retaining the current rate of 2.258.

Hiawassee City Council held a called-meeting on the evening of Aug. 16, to discuss the matter.

In compliance with state law, three public hearings are scheduled to take place; two on Wednesday, Sept. 5, at 10 a.m. and 2 p.m., and a third at 6 p.m. on Thursday, Sept. 6, at Hiawassee City Hall.

CORRECTION: The dates have been changed to Tuesday, Sept. 4, with one held at 10 am, and a second at 2 pm.

According to presented calculations, retaining the current 2.258 rate would supply the city of Hiawassee with an additional $7,080 in revenue. While the amount is a drop in the bucket compared to the city’s $4.1 million budget, Hiawassee Mayor Liz Ordiales explained to council members at Thursday’s meeting that the increased revenue could, for example, be applied to the continuing construction taking place at Mayors’ Park. 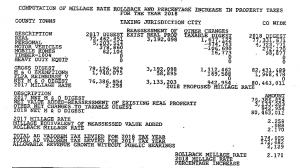 In addition, Ordiales reminded the council of the 52 parcel owners who had previously slipped below the city’s radar, and have since been billed for delinquent property taxes.

Councilwoman Amy Barrett was the most vocal of the elected officials on Aug. 16, however, raising a valid point that should the current millage rate remain fixed, taxes will, in fact, increase due to heightened property values.

Barrett firmly stated a desire to delay decision until taxpayers are afforded an ample opportunity to offer input.

Councilwoman Anne Mitchell contributed to the dialogue, claiming that as councilmembers, the duty is to act as policymakers, adding, “(The millage rate) is not the citizens decision to make.”

During the meeting, Mayor Ordiales displayed a PowerPoint chart, comparing the millage of Hiawassee to that of surrounding cities. According to the graphic, only Blairsville was listed as lower, at 1.945 mills. The fact that Blairsville boasts an airport was reasoned for the lesser tax rate. 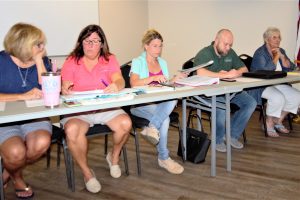 Councilmembers Patsy Owens and Kris Berrong did not offer clear insight into their positions, although Owens chimed in that maintaining the current rate shouldn’t be considered an increase. Councilwoman Nancy Noblet seemingly shared agreement with Barrett’s opposing stance, occasionally nodding in approval as Barrett spoke.

Of note, Towns County Commission and Towns County Board of Education recently announced a decision to accept their millage rollbacks, with both divisions citing increased property values as the logic behind the drop. The departments have scheduled special called-meetings for next week to finalize the matter.

Public turnout was low at the city’s budget meeting in comparison to monthly work sessions, although several in attendance voiced rejection to the rollback, favoring the current tax rate.

An outspoken newcomer, who was publicly noted as such by Barrett and Noblet, announced that he “does this as a living,” and asserted that he felt it would be “absolutely reckless to even think about rolling back that millage rate,” concluding that property values could potentially decrease in the future, leaving the city with a need to raise taxes in years to come.

Barrett and Noblet responded with recollection of the discord which surrounded the Blue Ridge Mountain Electric Membership Corporation (BRMEMC) franchise “fee” which was repealed late last year, upon opposition from taxpayers, yet readopted by current council once Ordiales replaced it on the agenda, adding bulk to the stance of welcoming a broader range of citizen feedback.

A softer-spoken citizen suggested that accepting the lower rollback rate might be perceived by the public as an attempt to gain “good press” in favor of taking the seven thousand dollar loss. Barrett objected to the notion, adding during the meeting that what might seem like a slight tax hike now has the potential to ultimately expand to a greater increase over time.

In sum, the city of Hiawassee unanomosly agreed to advertise the non-rollback millage of 2.258, and await public opinion at the early September hearings.

Hiawassee City Council will convene for their monthly work session on Aug. 27, at 6 pm, at City Hall. General questions and concerns from the public are traditionally addressed at the meetings.

Fetch Your News is a hyper local news outlet that attracts more than 300,000 page views and 3.5 million impressions per month in Towns, Dawson, Lumpkin, White, Fannin, Gilmer, Pickens, Union, and Murray counties as well as Cherokee County in N.C. – FYNTV attracts approximately 15,000 viewers per week and reaches between 15,000 to 60,000 per week on our Facebook page. – For the most effective, least expensive local advertising, call 706-276-6397 or email us at [email protected]