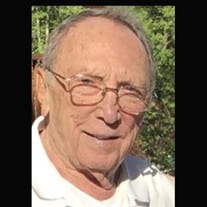 John Eden Johnson of Hiawassee, GA, passed peacefully in his home surrounded by his loved ones, on Thursday, July 26. He was born on May 2, 1934 in Pacolet, S.C. He goes to meet his parents, Loy Yates and Aline Eden Johnson, as well as his brother, Yates Johnson. He grew up in Union, S.C., and received his B.A. degree from his beloved Clemson University in 1957.

An active member of McConnell Memorial Baptist Church, Eden had a heart for giving. He enjoyed spending his time volunteering at the Towns County Food Bank and the Georgia Mountain Fair. Eden was an avid bridge player and loved fishing with his grandchildren. He also served on numerous city councils through the years.

A service honoring Eden’s memory is scheduled for Friday, August 3rd, at 11:00am at McConnell Memorial Baptist Church in Hiawassee, GA. In lieu of flowers, donations may be made to the McConnell Memorial Baptist Church Building Fund in memory of Eden Johnson athttps://mcconnellchurch.org/give/. Cochran Funeral Home of Hiawassee is honored to be in charge of the service arrangements.