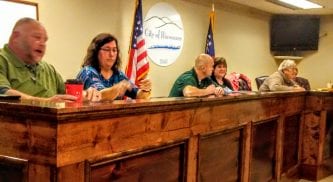 HIAWASSEE, Ga. – What began as a decree unanimously adopted in early August ended on the evening of Tuesday, Dec. 5, during a regularly scheduled session of Hiawassee City Council.

A 3-1 vote in favor of the eradication of the controversial Blue Ridge Mountain Electric Membership Corporation (BRMEMC) Franchise Ordinance, adopted by the Board during special called meetings Aug. 8-11, 2017, took place before a full room of residents.

Outgoing Council members Jay Chastain Jr. and Rayette Ross repealed the mandate, followed by a veto from newly elected Councilwoman Nancy Noblet. Councilman Kris Berrong maintained his support of the ordinance, outnumbered by the majority. Mayor Pro-Tem Anne Mitchell, also a proponent of the bill which was initially brought to the table by former Councilwoman and soon-to-take-office Mayor-Elect Liz Ordiales, was not included in the vote per charter regulation.

The three opponents of the ordinance raised their concerns on past occasions regarding the effect the decree would impose on the taxpayers of Hiawassee. Although the city has the legal right to require a fee from BRMEMC for the usage of city land for power pole placement, council members Chastain and Ross retracted their approval once the realization of an additional line item, passed along on the bills of consumers, was confirmed by the electric company. Newcomer Noblet followed suit, rejecting the mandate.

Also on the December agenda was a recap of Light Up Hiawassee, a Christmas lighting event held on the Square on Dec. 2. A video presentation created by Chris Harvey, set to the tune of Winter Wonderland, was displayed and acting Mayor Mitchell expressed gratitude toward those who helped make the opening celebration possible. Nine golf carts participated in the first annual parade with first place for decor awarded to the shopkeepers of Always Christmas. The Red Cross provided cookies and hot chocolate, Ingles offered a cookie decorating booth, and Santa arrived via fire engine.

The discovery of a 1993 Tree City USA ordinance was brought to the public’s attention, dissolving the need for subsequent adoption.

Mitchell says she is happy to turn the reins back to Mayor-Elect Liz Ordiales in January, comparing the experience of leading the Council to “falling into a vat of boiling oil.”

Motions to approve the September financials, the 2018 holiday and meeting schedule, and the ratification of the Towns County Water and Sewer Authority contract were unanimously agreed upon by the Council.

Hiawassee Police Chief Paul Smith announced warrants have been issued for two individuals suspected in the armed robbery of Save-A-Lot on Thanksgiving Eve. A press release is expected once the arrests are secured.

The meeting adjourned without advancing to an executive session.

Hiawassee City Council meets for work sessions on the last Monday of each month with regular meetings held the following Tuesday at 6 p.m. at City Hall.