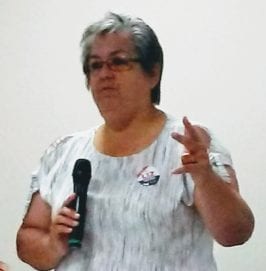 ‘”I have never, I repeat NEVER been accused of any wrong-doing during my presidency at the Towns County Fire Corps. This article I believe has been altered since it originally appeared. It originally stated I was the Vice-President, which is a position I have never held. These accusations are unacceptable lies and are a direct attack on my character,” Ordiales wrote. The Mayoral candidate went on to claim libel and defamation of character.

Fetch Your News caught the error referencing Ordiales as Vice-President, rather than the former President of the Towns County Fire Corps, soon after publishing and accepts responsibility for the slight inaccuracy. The mistake was promptly corrected once discovered.

Cindi Daves, a proponent of Ms. Ordiales, began in an email to FYN, “What happened to the day and age when news reporters were required to vet their stories BEFORE they print them?”

In an email entitled “Retract the Jr. Chastain Allegation,” Liz Ruf wrote, “Mr. Chastain is totally out of line, has no evidence and is attempting to negatively sway this election at the last minute and found easy prey through your news service. You should make this right immediately.”

LaJean Turner wrote in part, “Homework was obviously not done on this article before publication.”

Homework was, in fact, conducted. Fetch Your News does not allude to accusations without extensive research and substantial discovery.

In a 2013 letter written by former Vice President of the Towns County Fire Corps, Ken Bryant, the following allegations were cited as reasons Mr. Bryant chose to vacate his position under President Ordiales’s leadership:

Former Vice President Bryant also referred to “a comment, reflective of attitude, by President Ordiales on the record in a meeting stating, ‘I know we are here to help the Fire Department, but we have to take care of ourselves first.’”

The general media, as well as local officials, are listed as recipients on the resignation. A decision was made to publish the allegations in full based on the elected position the candidate hopes to fill.

Fetch Your News sent a copy of the 2013 letter to candidate Ordiales for review and provided an opportunity to respond in full.

“I would like to address the accusations made in the article published 10-27-17.  Those allegations were made by a disgruntled Towns County Fire Corps officer in 2013, who clearly demonstrated that he had joined this group for financial gain. That became evident upon his refusal to release the www.townscountyfirecorps.org website, which he is still in control of after 5 years. This prompted the Towns County Fire Corps to create a new website www.tcfirecorps.org When his invoice for website management was declined, he resigned from this position and wrote the letter of accusations,” Liz Ordiales stated.

“I suggest that interviews be conducted with Fire Department personnel to further identify the facts on this situation.  During my time with the Fire Corps, we have generated well over $250,000 of which 100% of those funds were spent at the discretion of the Town County Fire Chief.”

Fetch Your News contacted Towns County Fire Chief Harold Copeland on the evening of October 30, 2017, requesting a response. “Liz has done a great job raising funds for us. We truly appreciated it,” the Fire Chief said in a phone conversation, “but I’m unwilling to endorse anyone. I’m here to serve the municipalities, to protect from a life-and-property standpoint. I’m happy to serve everyone. I wish both candidates the best of luck.”

*UPDATED* Former Vice President of the Towns County Fire Corps, Ken Bryant, responded to FYN’s request for comment. Mr. Bryant stands by his decision to resign due the reasons listed in his letter addressed to board members, local officials, and the media. Mr. Bryant, a former federal agent and current fraud investigator, has submitted numerous additional documents related to his claims.

Mr. Bryant has since written a Letter to the Editor.

Follow Fetch Your News for additional coverage of the 2017 Hiawassee City Council election.