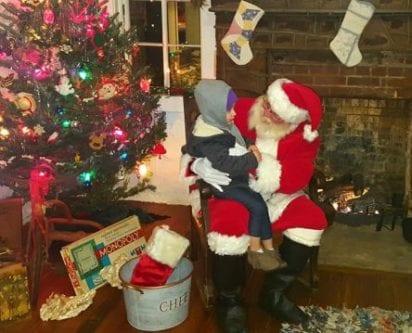 HIAWASSEE, Ga. – Light Up Hiawassee transformed the town’s square into a winter wonderland Saturday, Dec. 7,  setting the heart of town aglow with magical illuminations for the holiday season. Children of young and old gathered to celebrate the most wonderful time of the year, taking part in various activities such as cookie decorating, rock painting, ornament making, and penning wish-lists for Santa’s approval. 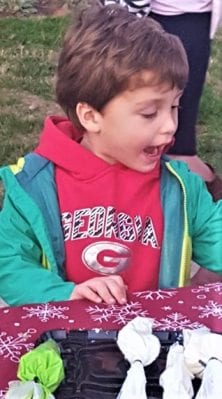 Towns County Public Library hosted a storytime session while CASA, who serves as court-appointed advocates for neglected and abused youth, lit LED luminaries along the square’s pathways in representation of the many children assisted in Towns County this year. Towns County’s American Red Cross, VFW Post 4807, and Hamilton Gardens offered a sampling of delectable treats on the city’s center grounds. 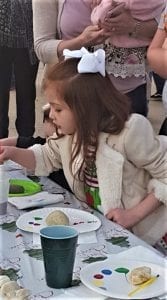 A flaming S’mores firepit, arranged to roast self-perfected marshmallows for the chocolate-graham cracker concoctions, proved popular with guests. Hiawassee Mayor Liz Ordiales served as the Master of Ceremonies, and the holiday lights made their annual debut promptly at dusk. 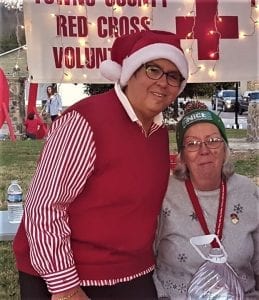 Festive holiday music wafted through the chilly air as the crowd awaited the arrival of Santa Claus, escorted by the Hiawassee Police Department, and riding tall upon a Towns County Fire and Rescue ladder truck. Children followed Saint Nick to the Old Rock Jail which was decked in spirited 1936 decor by the Towns County Historical Society, depicting the era that the site was constructed. Scrumptious cookies, old fashion candy, hot chocolate, and sweet apple cider were served as a long line of Santa-seekers wrapped their way through the restored museum. Vintage ornaments and toys were strewn throughout the old jail’s living quarters, transporting guests to a holiday season long ago. 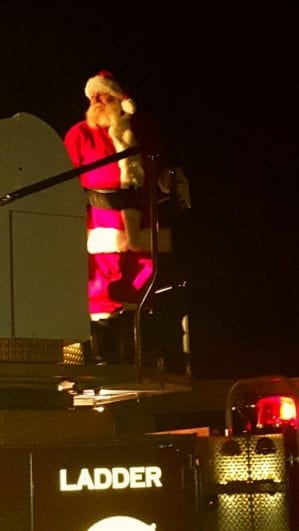 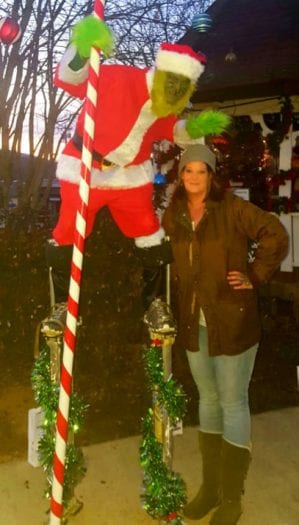 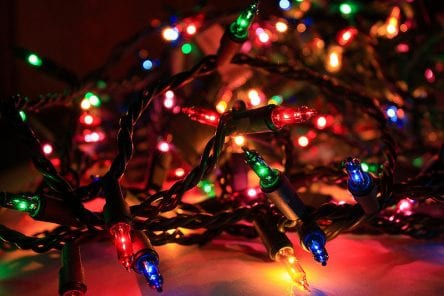 HIAWASSEE, Ga. – The City of Hiawassee announced “Light Up Hiawassee” will be delayed until Thursday, Dec. 6, due to a 100 percent chance of rain on Saturday.

The event will take place on Hiawassee Town Square, beginning at 4 p.m. and will include children’s activities, such as rock painting, a golf cart parade, CASA luminaries, Christmas carols, and of course, a visit from Santa Claus.

Vendors will be onsite during the festivities. Hiawassee Town Square is scheduled for illumination at dusk. 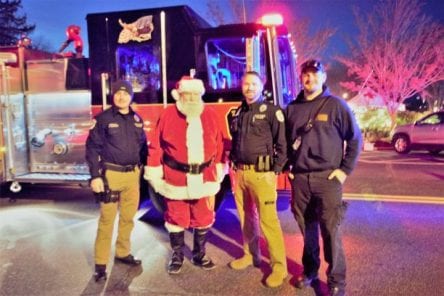 HIAWASSEE, Ga. – Jolly old Saint Nick took time out of his busy holiday schedule to make an appearance at “Light Up Hiawassee” on Thursday, Dec. 6, arriving on town square in style by fire engine, escorted by Towns County Fire and Rescue, and Hiawassee Police Department.

The festivities began at 4 p.m. with cookie decorating and rock painting activities for the children, followed by a golf cart parade, as merry music set the mood of the season. Towns County Red Cross volunteers served coffee and hot chocolate, and VFW Post 7807 offered hot dogs, refreshments, and select merchandise. 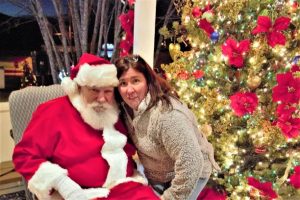 Luminary candles bordered the sidewalks in honor of the local children assisted by the Enotah CASA program throughout the year, with CASA Chair Liz Ruf briefly addressing the crowd.

A mailbox for letters to Santa sat center on Hiawassee Square, at the ready to accept requests from wishful children. Hamilton Gardens extended a host of pointsettia plants for purchase. 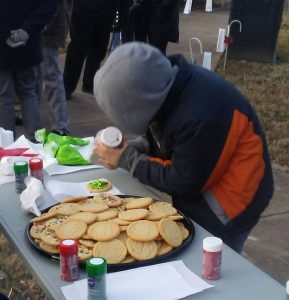 A young boy decorates a cookie during the event

Shortly before Santa’s arrival at dusk, Mayor Liz Ordiales counted down the illumination of the square, and the heart of Hiawassee magically transformed into a winter wonderland at the flick of the switch.

The event was originally scheduled for Saturday, Dec. 1, postponed due to unfavorable weather.

Fetch Your News is a hyper local news outlet, attracting more than 300,000 page views and 3.5 million impressions per month in Towns, Dawson, Lumpkin, White, Fannin, Gilmer, Pickens, Union, and Murray counties, as well as Clay and Cherokee counties in N.C. – FYNTV attracts approximately 15,000 viewers per week, reaching between 15,000 to 60,000 per week on our Facebook page.

HIAWASSEE, Ga. – Light Up Hiawassee, an annual luminary celebration on town square which sets the Christmas season into motion, is scheduled for Saturday, Dec. 1, and Event Coordinator Nancy Noblet hopes to see vendors and volunteers join in the merry-making event.

“Anybody and everybody, please come out and help,” Noblet asked.

The holiday light decorating date has been set for Saturday, Nov. 17, at 9 am, on Hiawassee Town Square, and volunteers are needed to assist in the efforts. The event will be delayed in the event of inclement weather. Additional information is available through Nancy Noblet at 706-897-1779. 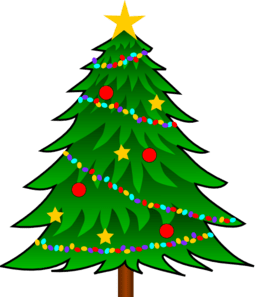 Spaces are available for vendors during the Light Up Hiawassee celebration, with applications available at Hiawassee City Hall. A check for $50.00 should be made payable to the “City of Hiawassee.” According to Hiawassee Mayor Liz Ordiales, vendor application proceeds will be directed toward flower purchases to beautify Hiawassee Town Square in the spring. Spaces are limited, and vendors must provide their own equipment, tent, tables, chairs, electrical extension cords, etc. Electrical outlets will be available on a first come, first serve basis. The event will begin at 4 p.m. on Saturday, Dec. 1, with vendors permitted to set up as early as 9 a.m.

There will be no vendor charge for non-profit organizations wishing to participate.

The deadline for application submission is Friday, Nov. 16, 2018.

The schedule of events for Light Up Hiawassee is as follows: 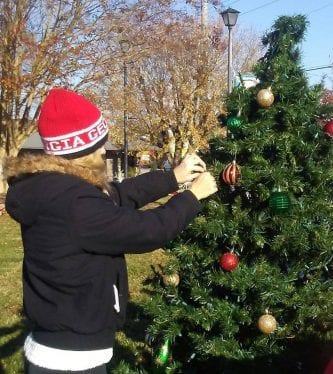 UPDATED: Light Up Hiawassee is postponed until Thursday, Dec. 6, due to the threat of rain. 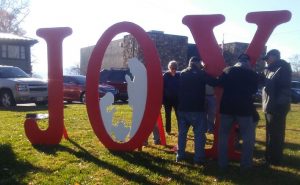 Hiawassee Council member and event organizer Nancy Noblet expressed appreciation for everyone who lended a hand in preparing for the upcoming event.

Light Up Hiawassee will take place on Saturday, Dec. 1, in the heart of Hiawassee, beginning at 4:00 p.m.

A variety of vendors will be on site during the festivities. 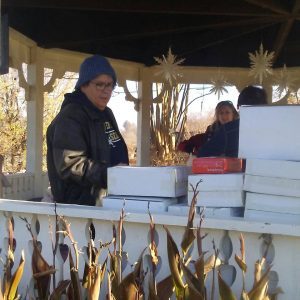 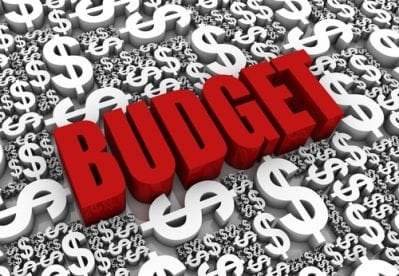 HIAWASSEE, Ga. – The 2018-2019 Hiawassee budget was unanimously approved by city council members during the Oct. 29 monthly work session. The motion was raised by Councilwoman Anne Mitchell, and seconded by Councilwoman Patsy Owens. Councilwoman Nancy Noblest asked for the names of staff employed within the city’s sewer, water, and water treatment departments, in quest of a better understanding of the breakdown in employee pay, prior to the budget vote.

Ebony Simpson, a coordinator with the PlanFirst program, addressed the council and citizens, following the adjournment of the brief budget segment. Simpson commended Hiawassee on becoming a designated PlanFirst city, explaining the incentives offered as a result, one of which will result in a half-percent interest rate reduction on the $1.8 million GEFA loan extended to the City of Hiawassee. 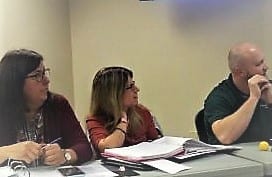 According to Simpson, Hiawassee will receive official PlanFirst recognition during a state ceremony in either January or February, 2019, once Georgia’s soon-to-be-elected governor takes office.

In other news, a 45-day sign permit moratorium is scheduled to appear on next week’s regular council agenda, coinciding with the county’s recent decision to amend the sign ordinance, which will allow the city to consider similar measures.

Hiawassee Mayor Liz Ordiales announced that the December council work session, and the January regular meeting, will not be held due to the former falling on Christmas Eve, and the latter scheduled for New Year’s Day.

The upcoming Halloween event and the “Light Up Hiawassee” Christmas celebration were discussed, with interest as to whether a lighted “Merry Christmas” sign would be displayed on Hiawassee Town Square, in addition to the “Happy Holidays” sign planned to be installed. In response, Mayor Ordiales revealed a photograph of an eight foot wooden cut-out, spelling the sentiment “JOY”, with a compact nativity scene cast between the second letter. A lighted “Merry Christmas” greeting was purchased by the former City of Hiawassee administration, with two current council members vocalizing support of its future use. Ordiales stated that a printed banner, rather, with the words “Merry Christmas” will be hung on the town square.

The work session ended with Councilwoman Amy Barrett questioning the necessary process for applicants whom are interested in serving on the Hiawassee Ethics Board. Mayor Ordiales replied that while citizens can submit an application to City Hall, only one candidate has expressed interest to date. Councilman Kris Berrong interjected that he had knowledge of interested individuals. Mayor Ordiales asserted that applicants whom do not regularly attend city meetings will not be approved by the joint vote needed from both council and mayor, a requirement for one-of-the-three appointed board members.

Background information on the above highlighted texts is available by clicking the supplied links.

Hiawassee City Council is scheduled to convene for a regular monthly session at 6 pm, Tuesday, Nov. 6.