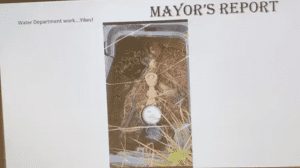 The proposed alcohol ordinance will have its first reading Tuesday and the Hiawassee City Council discussed some of the issues with it before putting it on the agenda, including a free-market approach versus regulating the number of package stores, and rewording the brown bag portion. The first reading will be at

“I don’t see why the free market system can’t control how many liquor stores we have,” said Mitchell.

The alcohol ordinance established one store per 30,000 people. 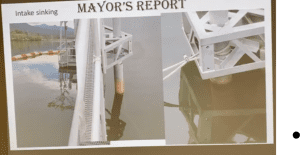 The intake area at the water plant needs repair. The council will discuss this at Tuesday’s regular meeting.

“I know Liz (Ordiales) doesn’t like the notion of a business failing,” Mitchell said. “If we put a limit on it, I feel like we are going to a place we don’t want to go.”

Another council member countered. “As a business owner, I agree with (Ordiales),” she said. “With a lot of our vendors, they have a security thing in place that you can’t sell certain products within a certain mile radius as other businesses.”

Council member Amy Barrett said she saw both sides of the issue. Although concerned the city would have a lot of package stores, she said that Barnett made a “valid point.”

“We don’t regulate any other business,” she pointed out.

As for the brown bag provision, Ordiales posed a question.

“It only states wine is allowed. What if I want an ale? A stout?” she asked. 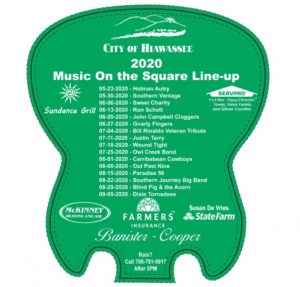 Only two more Music on the Square events are left.

“Then you should have one,” Barrett said.

The alcohol ordinance will be reworded prior to Tuesday’s meeting. A second reading and vote will happen in October.

The city is transitioning tax collection from the tax commissioners office to the city, an effort that has been a little bumpy.

“We received the five-year history and the tax rollback,” said Liz Ordiales, mayor. “I haven’t had time to review them and the folks at the tax commissioner’s office have been less than helpful in transitioning.”

Still, she said Jennifer Gardner, court clerk, has been leading the effort and doing a good job.

“We’ve got a meeting Wednesday with the GMA (Georgia Municipal Association) tax guru’s who will teach us how to properly do this and make sure we transition everything over,” said Ordailes. 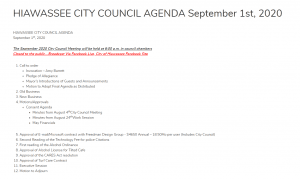 Tuesday’s agenda for the regular session of the Hiawassee City Council.

Get a copy of Tuesday’s agenda here.

City of Hiawassee Music on the Square