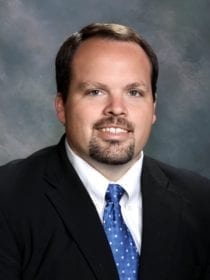 Nelms accepted the CEO position at Flint Energies in Reynolds, Georgia.  BRMEMC was sad to see him leave, but understand this is a great opportunity for him and his family.

Nelms began his career at Blue Ridge Mountain EMC in August 2016. He was hired as the seventh general
manager since the inception of BRMEMC in 1938. During Nelms’ four-year tenure, the EMC has seen a growth
in its Membership that now exceeds 54,000 meters, 46,791 members, and 6,200 miles of electric lines.

Board of Directors President Ray Cook said, “The Board is very grateful for Jeremy’s leadership over the last
four years. He and the employees have done an outstanding job serving our Membership and we know
without a doubt this exceptional service will continue. Jeremy leaves the EMC in very good fiscal health and a
great position for growth. We wish Jeremy and his family the best in this next phase of their lives and we
sincerely thank him for his service and dedication to BRMEMC.”

The BRMEMC Board of Directors will begin the search for a new general manager later this summer. They have not stated whether or not they plan to have a new general manager in place before Nelms leaves in September. As soon as that information becomes available, it will be released to BRMEMC members.

“Having the opportunity to work alongside some of the finest co-workers I’ve ever met has been both
rewarding and gratifying,” said Nelms. “I have made wonderful friendships over the last four years and I know
the EMC, its Board, and employees will continue to succeed and prosper for the benefit of the Membership. I
thank the Board for allowing me the opportunity to pursue and grow my career at BRMEMC over these last four years.”

Blue Ridge Mountain Electric Membership Corporation is a member-owned electric cooperative
headquartered in Young Harris, Georgia, serving nearly 47,000 members in Cherokee and Clay Counties in
Western North Carolina, and Towns, Union and Fannin Counties in Northeast Georgia. Organized locally in
1937, BRMEMC has invested well over $280 million in physical infrastructure in its mission to provide reliable
electric and broadband services to its members where those services would not otherwise have been
available. Blue Ridge Mountain Electric Membership Corporation is an equal opportunity provider, employer
, and lender