(ATLANTA) — Today, Secretary of State Brad Raffensperger announced that, pursuant to the authority vested in him by O.C.G.A. § 21-2-50.1, he is postponing the Statewide General Primary/Presidential Preference Primary Election until June 9, 2020.

Yesterday, Governor Brian Kemp extended the current public health state of emergency until May 13, 2020. Lieutenant Governor Geoff Duncan and Speaker of the House David Ralston concurred in the Governor’s extension of the state of emergency.

“Due to the Governor’s extension of the state of emergency through a time period that includes almost every day of in-person voting for an election on May 19, and after careful consideration, I am now comfortable exercising the authority vested in me by Georgia law to postpone the primary election until June 9,” said Secretary Raffensperger. “This decision allows our office and county election officials to continue to put in place contingency plans to ensure that voting can be safe and secure when in-person voting begins and prioritizes the health and safety of voters, county election officials, and poll workers.”

Throughout this crisis, the Secretary of State’s office has been in close contact with county election officials across the state. Over the past week, the reports of mounting difficulties from county election officials, particularly in Southwest Georgia, grew to a point where county election officials could not overcome the challenges brought on by COVID-19 in time for in-person voting to begin on April 27. Additionally, current modeling by the U.S. Centers for Disease Control and Prevention and by the Institute for Health Metrics and Evaluation projects the COVID-19 pandemic in Georgia will peak around April 24, only days before in-person voting was scheduled to begin. While challenges will certainly remain on June 9, these additional three weeks will give the Secretary of State’s office and counties time to shore up contingency plans, find and train additional poll workers, and procure supplies and equipment necessary to clean equipment and protect poll workers.

Emergency authority is something that should be exercised carefully, and moving an election should only take place in the rarest of circumstances. While Secretary Raffensperger previously expressed concern that he did not have the authority to move the primary election again, the Governor’s extension of the state of emergency to a time that includes almost every day of in-person voting for a May 19 election is sufficient to allow the Secretary to exercise the emergency authority given to him by O.C.G.A. § 21-2-50.1 and move the primary election to June 9.

“I certainly realize that every difficulty will not be completely solved by the time in-person voting begins for the June 9 election, but elections must happen even in less than ideal circumstances,” said Raffensperger. “Just like our brave healthcare workers and first responders, our county election officials and poll workers are undertaking work critical to our democracy, and they will continue to do this critical work with all the challenges that the current crisis has brought forth. This postponement allows us to provide additional protection and safety resources to county election officials, poll workers, and voters without affecting the November election.” 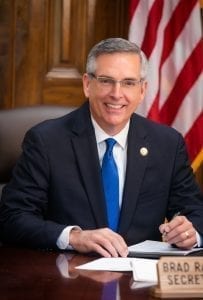 The voter registration deadline for the June 9, 2020 election will be May 11, 2020. Early voting will begin on May 18, 2020. Pursuant to O.C.G.A. § 21-2-501, moving the primary election to June 9, 2020 will move the primary runoff to August 11, 2020.Pushing back the primary to June 9 gives Georgia election officials additional time to put in place contingency plans to allow for safe and secure voting, but pushing back the primary election any further could potentially have negative consequences on preparation for the November 3, 2020 General Election. Given existing deadlines to prepare and send ballots for the November election, particularly for military voters, moving forward on June 9 is the best way to ensure a successful election year in Georgia.