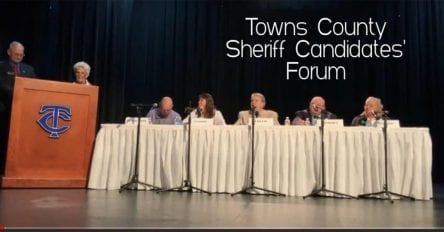 HIAWASSEE, Ga. – The COVID-19 scare did not prevent a crowd of constituents from attending the 2020 Towns County Sheriff Candidates’ Forum held Saturday, March 14. Each of the five contenders were asked a series of questions in a staggered order, ranging from their plans for the sheriff’s office to how they intend on handling the law enforcement agency’s operational budget. A consistent theme throughout the forum was the contenders’ ambition to instill community policing and combat the drug problem in the area.

FYN provided a live-streamed video of the forum for viewers to watch in real-time.

The forum was hosted by the Towns County Republican Party and moderated by John Van Vliet, a professor at Young Harris College. Candidates for Towns County’s next sheriff — Jim Couch, Linda Curtis, Kenneth Henderson, Lisa Joseph, and Daren Osborn — had informational tables set up in the lobby of Towns County Schools for citizens to learn more about their campaign platforms and obtain signs or stickers of support.

Each candidate issued opening and closing statements between the multiple questions submitted by Towns County residents. A mild rift occurred when contestant Joseph stated that she was a good choice for sheriff due to her short time residing in the county and lack of kin who could be shown special treatment if a native Towns Countian was elected. Candidate Osborn, a lifelong resident of Towns County, took advantage of the time allotted for his closing statement to respond to Joseph’s statement, vowing that the insinuation would not be the case if elected.

Interestingly, the five candidates responded in limited terms when asked where their campaign contributions stemmed, with the contestants listing self-funding and “family and friends” as donors. Candidates are required to file a campaign contribution disclosure statement with the Georgia Government Transparency and Campaign Finance Commission in order to disclose the identities of financial backers. Osborn, however, divulged that his contributions have amounted to approximately $10,000 thus far.

Contender Henderson publicly canceled his March 31 “meet and greet” as a health precaution due to the coronavirus outbreak. Towns County Republican Chair Betsy Young announced at the start of the forum that no cases of COVID-19 had been reported in the Ninth District as of March 14, 2020.