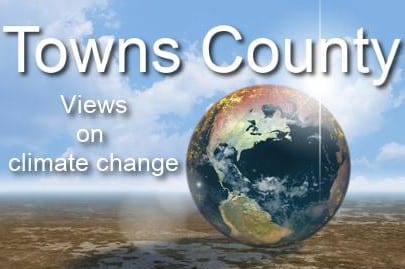 HIAWASSEE, Ga. – According to a poll conducted by the Yale Program on Climate Change Communication, approximately 59% of Towns County residents believe that global warming is fact rather than fiction. In comparison, the study shows that only 32% of local citizens claimed to discuss the issue with others. Nearly half of the survey participants purportedly said that they believe global warming is affecting the weather, with 44% of those polled stating that human activity is primarily to blame.

The statistics were provided to FYN by Jim Tolbert of the Conservative Caucus Action Team, a group that describes itself as composed of Republican, libertarian, conservative, and right-of-center independent Citizen Climate Lobby (CCL) advocates. According to CCL research, roughly seven in ten registered U.S. voters (73%) believe that global warming is happening. The results of the nationwide survey include nearly all liberal Democrats (95%), a large majority of moderate/conservative Democrats (89%), and two in three liberal/moderate Republicans (66%). In contrast, only about four in ten conservative Republicans (41%) believe that global warming is real. 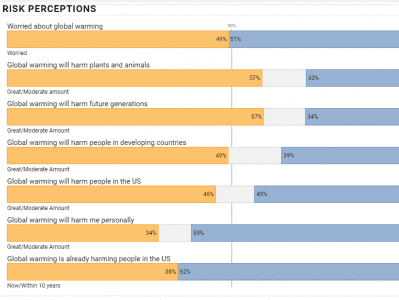 “Nearly six in ten (58%) Americans are now either ‘Alarmed’ or “Concerned” about global warming. From 2014 to 2019, the proportion of ‘Alarmed’ nearly tripled,” Climate Change Communications explained. “Our prior research has categorized Americans into six groups – Global Warming’s Six Americas – based on their climate change beliefs, attitudes, and behaviors. The ‘Alarmed’ are the most worried about global warming and the most supportive of strong action to reduce carbon pollution. In contrast, the ‘Dismissive’ do not think global warming is happening or human-caused and strongly oppose climate action.”

According to Pew Research Center, studies found that in the past six years, the number of Democrats who said they are concerned about climate change increased by 20 points. Among Republicans, however, the statistics have essentially remained the same.

“When it comes to party divides, the biggest gaps on climate policy and climate science are between those at the ends of the political spectrum, “Pew Research Center stated. “Across the board, from possible causes to who should be the one to sort this all out, liberal Democrats and conservative Republicans see climate-related matters through vastly different lenses. Liberal Democrats place more faith in the work of climate scientists (55% say climate research reflects the best available evidence most of the time) and their understanding of the phenomenon (68% say climate scientists understand very well whether or not climate change is occurring). Perhaps it follows, then, that liberal Democrats are much more inclined to believe a wide variety of environmental catastrophes are potentially headed our way, and that both policy and individual actions can be effective in heading some of these off. Even the Republicans who believe the Earth is warming are much less likely than Democrats to expect severe harms to the Earth’s ecosystem and to believe that any of six individual and policy actions asked about can make a big difference in addressing climate change. And, a majority of conservative Republicans believe that each of the six actions to address climate change can make no more than a small difference.”

A 2018 Climate Fee and Dividend Resolution was rejected on the floor by Hiawassee City Council in a 4-1 divide.